Why does a restaurant with 20 years of very successful family history, success in gastro competitions and a loyal clientele change? Well , in this case it’s not so much a change but an adjustment here or there. The Gallego family have run La Plaza  (Plaza de Libertad 16-17), specialising in the best rice dishes from Valencia, indeed some of the most traditional dishes of the region. 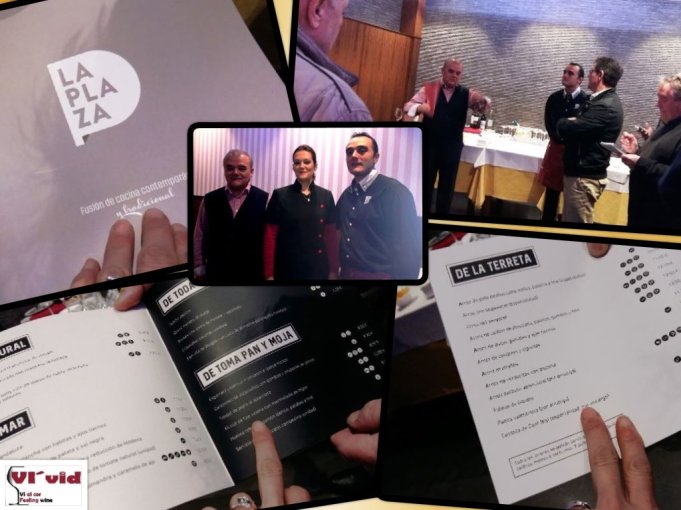 Diego and Paqui, the owners have decided to retire and the next generation Paco, Nieve and Victor are taking over, following  refurbishment, and have their personal style to introduce. Nothing dramatic, some tweaks here and there , some modern touches in the presentation and content of dishes but a continued drive for quality…quality ingredients and quality food for discerning customers who are looking for something a little more up to date.

The philosophy has always  been  to use only top quality ingredients, fresh vegetables, Arroz DOP Valencia ( usually Senia but Bomba in Arroces melosos). Lamb will always be milk-fed and the beef is ternera Gallega with long hanging to ensure taste and tenderness.

We have had the pleasure to sit on some juries for food competitions (or attend them)  in Valencia as well as those for wine and craft ales. The passion behind this restaurant has grown daily and they have regularly learnt from the competitions they have entered, garnering prizes in several as follows:

Today the family run the restaurant and the next door bar which serves breakfasts, almuerzos and menu del día. They prepare  around 10 different rice based dishes on a daily basis with fideuà available as well as seafood, fresh fish, and top quality meat dishes such as Chuletons.  They have access to the square outside for Baptisms and Wedding parties and a private room with seating for 18.

It was here Diego and Victor presented the   new menu whilst service continued in the main restaurant with its selection of prize certificates proudly displayed.

There is an extensive selection of starters to choose from and it is here some of the changes are taking place, content being substituted, different textures added and some exotic ingredients introduced.

We began with two simple plates of Cheese with Walnuts and Jamon. Both are traditional sharing dishes, the first  salty and firm textured, the second light and tender. Russian salad is a big favourite in Valencian restaurants and this third dish was an excellent example, with a twist in that the mayonnaise binding it together had a subtle touch of  wasabi, giving it a gentle lift. 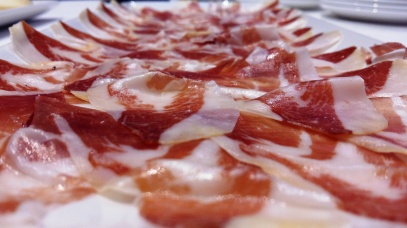 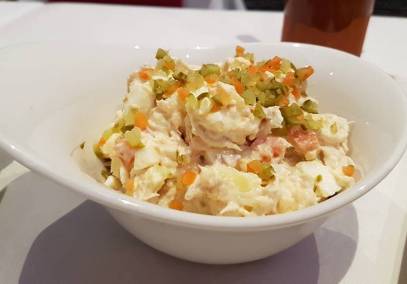 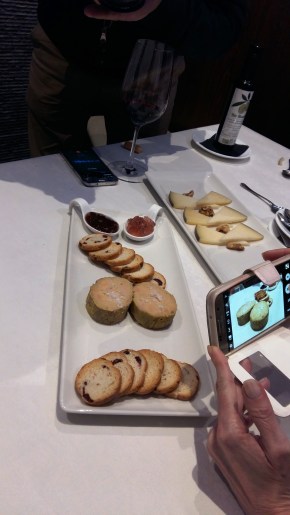 Traditional breads appeared on the table to try with olive oil or as an alternative to the toasts which accompanied the next two dishes….a mi-cuit de Foie , 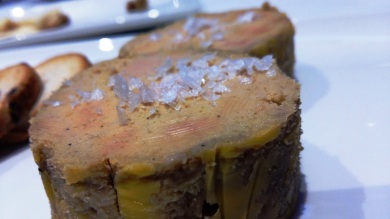 home-made and served with a rose petal jelly and blueberry marmalade and a Timbal of Ajoarriero, 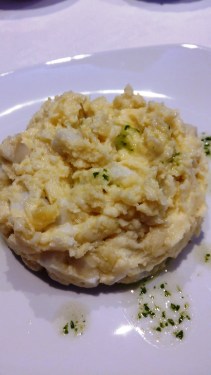 the twist being that the traditional cod had been replaced with cuttlefish, cooked perfectly with a light and fluffy  and very smooth potato base with garlic.

The seafood theme continued with prawns on artichoke hearts 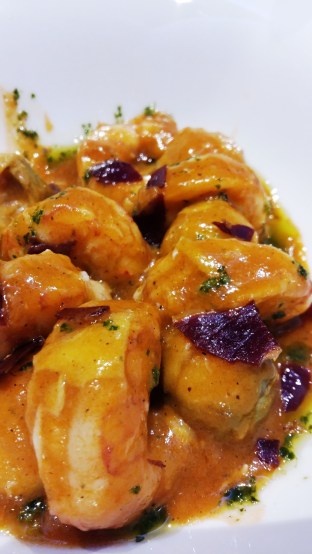 in a white wine and fish sauce dressed with crunchy jamon. This had an underlying touch of sweetness which we enjoyed.

Up to this point the wines accompanying the dishes had been a Verdejo (DO Rueda) and a Merlot from Vegamar ( DO Valencia) . The depth of the dishes was increasing and we moved to a Rioja from Beronia to accompany the Octopus from the brassa servedwith a 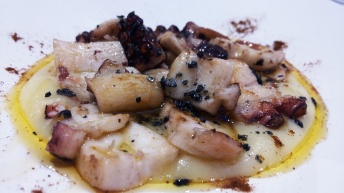 The final starter dishes were Calamar a la Playa, squid cooked on the plancha, served in the manner of a sea-anenome with baby broad beans and ajo tierno…green garlic and Cuttlefish in a parsley oil, salsa mery and a reduction of Balsamic vinegar. 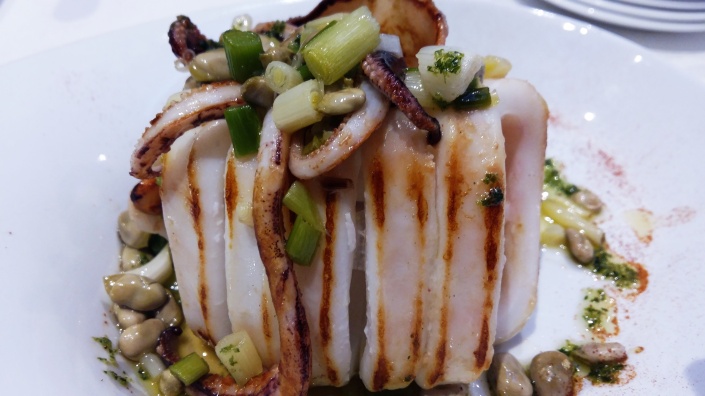 The presentation of the Calamar worked well as a spectacle but both dishes were also perfectly tender and melted in the mouth.

Torrente is home to its own  gastro competition , the Concurso de Arros Passejat or Arros de San Blai ( Blazey in English) patron Saint of gardeners. This is a type of Arroz al Horno but very different to the classic found in Xativa. The latter has potato and tomato but the San Blai is served with a Marzipan dumpling. 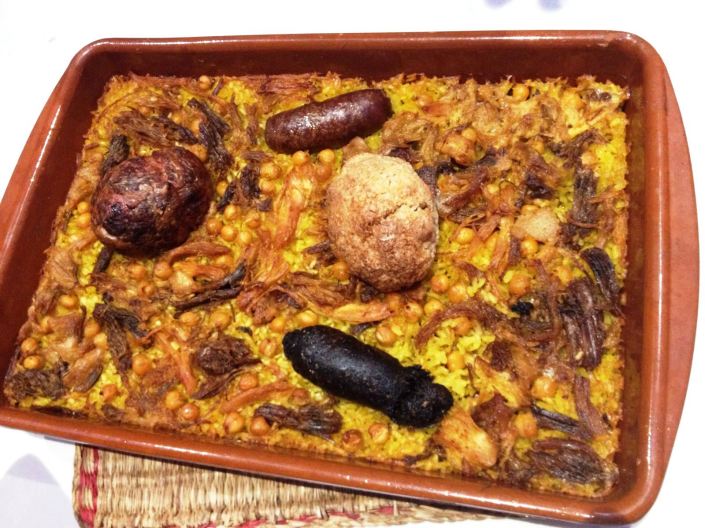 Arroz al horno is a dish made the day after a Cocido ( or Putxero) using the left-over stock and scraps of meat . To this are added pelotas (spiced pork balls) with black pudding (morcilla) sausages, chickpeas and rice which is then baked in the oven in a terracotta dish.

The dish we tasted was a triumph, full of flavours and highly recommendable!

Also presented as a main course was an arroz  (rice dish) of confit of duck, wild mushrooms, ajetes, foie and truffle. This was rich but very easy to eat and both dishes consisted of correctly cooked rice, loose and with a good socarrat. 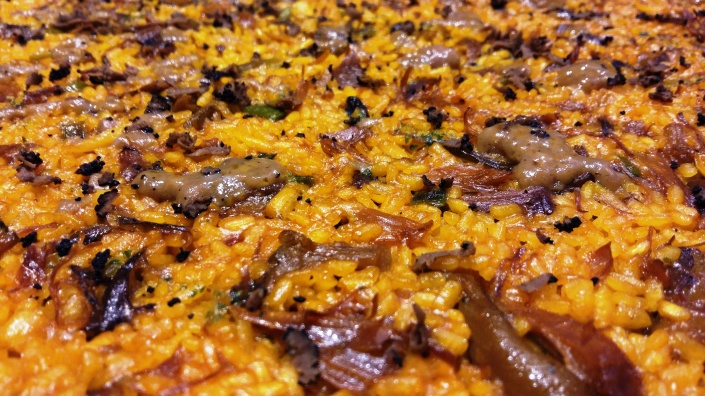 From the fish menu we tasted a loin of cod, translucent, moist  but perfectly cooked with  a mousseline of garlic mayonnaise and honey with black  onion seeds. 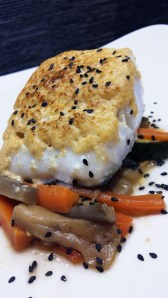 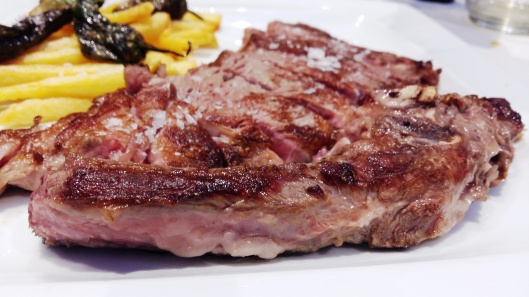 For meat-eaters and connoisseurs of the `chuletón´ we finished with a Gallegan steak from ecologic beef. This was to die for, seared on the outside, deep aubergine in the centre and oozing with flavour! It was presented  with a garnish of French fries and padron peppers. 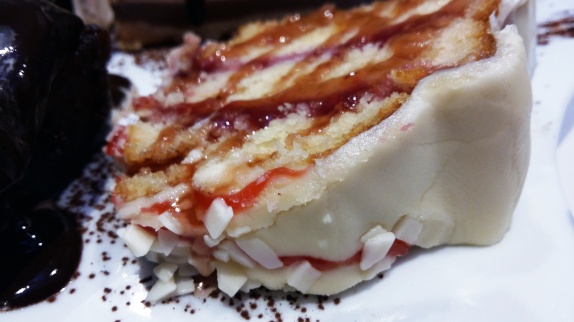 A selection of home-made desserts and coffee followed,  A cheesecake served with hot chocolate, a Brownie with custard, `Grannies´ tart, 3 chocolate tart and a white chocolate tart with a raspberry sauce. Can´t go wrong with those! 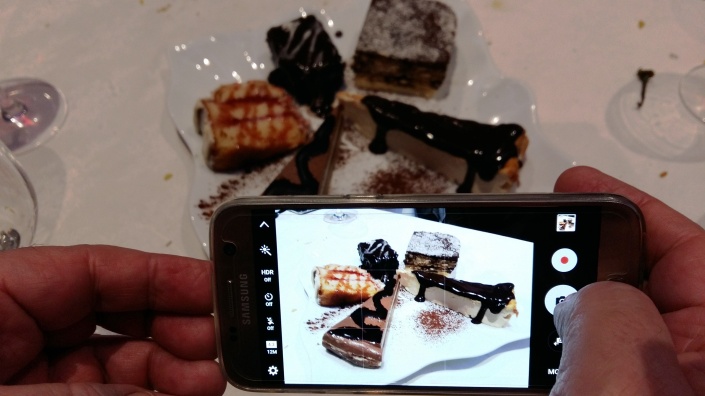 A meal will set you back around 35€ a head, main rice dishes costing around 12.5-13.5€ . There is a good selection of wines which includes several Valencian quality references in   white, cava and red.

We have no difficulty recommending a restaurant which has the passion for quality, modern touches with plates based on traditional gastronomy and an extensive variety of choice…..everyones palate should be satisfied in La Plaza!