Around the end of January 2014 we visited a new Bodega in El Azagador, a hamlet of nearby Requena, to see the new facilities which had risen on the site of the old local cooperative.

It seems this hamlet may be the home to a family of phoenixes. Last week we visited the new Bodegas Vibe which has literally arisen on the site of the old Bodegas Torroja which we reported on in  January 2010.

Vibe is a new project, based very much on local and family tradition, respect for the vine and their soils and for quality wines which reflect these ideals. Juan Carlos Garcia is behind the initiative and I talked with him at length about it.

When Torroja closed they had a number of ranges of wines , some exported and their top line was called `Sybarus´. These included monovarietal wines from the family vineyards, from varieties such as Tardana and Bobal, as well as a cava. It is this quality of wine which Juan Carlos has in mind to produce in Bodegas Vibe.

The Tardana is from vineyards with over a hundred years of age near Los Ruices, the Bobal from 80-year-old plants surrounding the Bodega. These regional varieties are those that he has the greatest ambition for although they have other varieties (Cabernet Sauvignon, Merlot and Syrah)  as well.

We sat in the office on a day when the elements were doing their best outside! We discussed the Tardana first and he spoke about the variety and its characteristics, suitability as a monovarietal  and how, at least for now, there were no plans for an oaked version of the wine.

For the Bobal he spoke passionately about how he wanted to make wine which expressed the characteristics of the variety through an `Alta Expressión´style wine. He also spoke about his frustration with Syrah, not for the quality of wine it produces but for its `behaviour´, (like a child which does not thrive)  which is erratic to say the least. 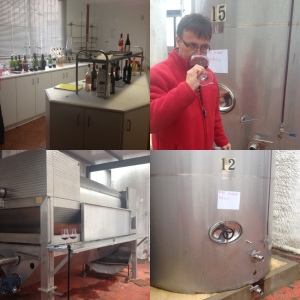 Tasting from Deposit and the New Press.

We decided to risk the weather and moved across the road to the deposits and to the barricas to taste some of the 2016 wines in production. We started with a Syrah from the barrel which showed just how good the variety can be! A bright cherry red with a medium body this had expressive fruit, had undergone malolactic fermentation in wood but was very drinkable now, just as it is. Juan Carlos will decide soon whether it will be bottled in a couple of months or whether it will undergo the full 12 months crianza.

Next up was a Merlot/Cabernet Sauvignon blend also from barrel, with a deeper colour, a wonderful nose full of violets, with probably another three months to come in oak but which is perfectly drinkable now.

We continued outside tasting from the deposits, a selection of blends all of which showed immense promise of what is to come.

Then we retired back into the laboratory to discuss wines some more and to taste the bottled wines which the bodega introduced last year. 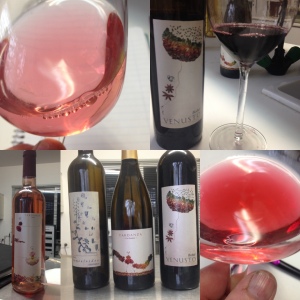 Comparison of Shades of Rosado.

We started with the `Tardanza´ a monovarietal Tardana. 2015 with 12%ABV. This is gold in colour, with old gold flashes and is clean and bright. On the nose it is fresh has the characteristic apple and with over a year in bottle is round, fresh, with a perfect acidity and a dry long finish.

We also enjoyed a lively chat about Rosados from Bobal and the current trend for paler, (French style) wines. We tested both his classic, traditional style Rosado from Bobal which was full of characteristic strawberry, bubble gum etc and the pale rose alternative which las lost some of those characteristics in the filtering process. I know which we liked best but marketing has an important part to play in the final style of wine produced!

The Venusto Bobal 2015 Madurado en Barrica 13%ABV was our final wine. This is full of varietal characteristics. Deep black cherry in colour full-bodied and with good long legs. On the nose immediately full of black cherry fruit and strawberry, then menthol notes, jam. In the mouth the licorice emerged from the mature fruit, then round tannins. The wine had just four months in oak and is unmistakably Bobal. 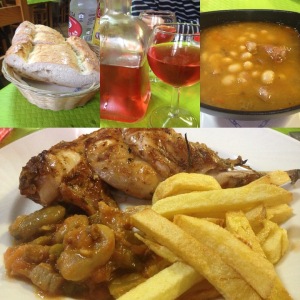 Our discussions carried on over lunch in nearby Bar Ramos (San Antonio) a favourite with the wine trade and not to be missed at any opportunity. Main dishes of the day were a superb bean stew and rabbit from the wood fired bbq washed down with the Bobal rosado from the local coop….highly recommendable!

VÍ Vid  wish Juan Carlos and Vibe success with this new project, it is good to see the passion for well produced wines and support for the local varieties as well as to see the old family bodega back in use again. We also look forward to showing these and the new wines in tastings later this Spring and into the future.