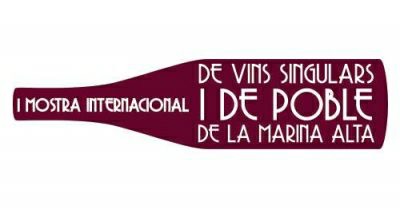 London has had its RAW wine fair for some time but this is the first wine fair dedicated to `Singular´wines, (Ecologic or Biodynamic, natural wines where respect for the environment, recovery of lost varieties of vines and special handling in the winery are the key considerations for the winemaker) to be held in Valencia.

These wines deserved to be presented in a special location and the RiuRau del Senyoret in the village of Jesus Pobre, close to Javea was chosen by the newly formed Association of Singular Wines and towns of the Marina Alta. I believe the organisers who had been hoping for about a dozen bodegas were surprised to end up hosting some 33 bodegas from New Zealand, Italy and France as well as other areas of Spain and three local bodegas from the Marina Alta.

They will have been equally surprised by the reaction of the public and the attendance which was much higher than expected giving these wines excellent exposure. The Sumilleres Association from Valencia ( ASVASU) organized a bus to transport its members and guests.

The organisers had thoughtfully arranged stalls selling excellent local food products so the scene was set on a warm Sunday evening for a fascinating tasting. 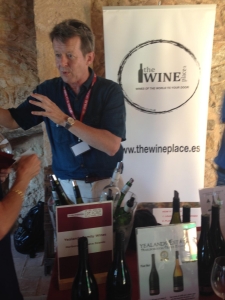 VÍ Vid commenced at the stand of The Wine Place a project run by Mark O´Neill, an Irishman living in Valencia and running a wine import/export company and offering WSET courses. He was showing the International wines and we started with wines from the `Lafite of the Languedoc´. 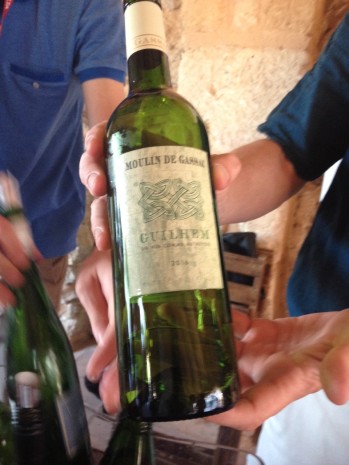 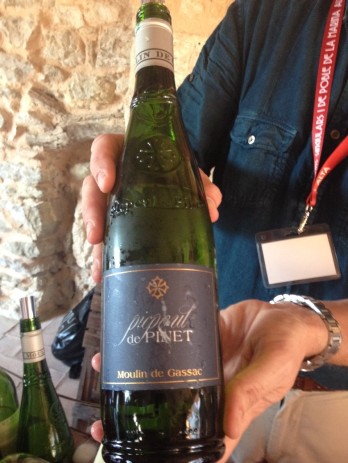 Mas de Daumas Gassac was the brainchild of Aime Guibert, sadly no longer with us who discovered the incredible mineral soils around Aniane in the garrigue of the Languedoc of Southern France. The winery is now run by his son Basile.

Mark had chosen the wines with the Moulin de Gassac label. These are wines produced at the local co-op and Aime was a pioneer in dragging the cooperative movement up by its bootstraps by only buying grapes whose owners submitted to his exacting standards on yield and quality , a practice continued today. We commenced with the Grenache Blanc, Sauvignon Blanc blend 2016, a fresh dry white with a long dry finish. The Picpoul de Pinet, normally grown on the Languedoc´s coastal strip was screaming `gimme oysters´, golden in colour and complex on the nose, round in the mouth, quite full and with a mineral long dry finish.

Mark also had the Vargaglione Malvasia from Puglia in Italy. The winery is dedicated to making wines which express the soils from near Salento On the nose, honey and wet wool, in the mouth fresh, with a very pleasant long full finish. 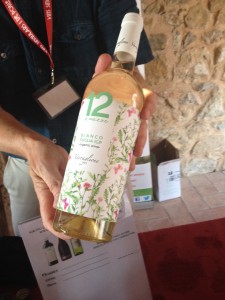 Finally from his selection we tried the Yealands Sauvignon Blanc from New Zealand. This is a winery noted for extracting every last hint of flavour from the grapes. The classic gooseberry, cats pee nose with citrus and tropical notes (pineapple) aplenty did not fail. A very aromatic nose the fruit in the mouth was tropical and full. Not having  tasted a NZ Sauvignon Blanc for some time  this wine brought memories flooding back. The Pinot Noir from the same source was a typical light cherry red, with cherry fruit on the nose and round, mature fruit in the mouth. Again a very expressive and typical wine from this variety and location. The wines are available in Valencia,  from Mark at ( thewineplace.es ) 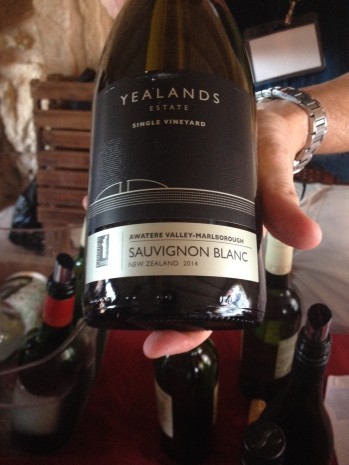 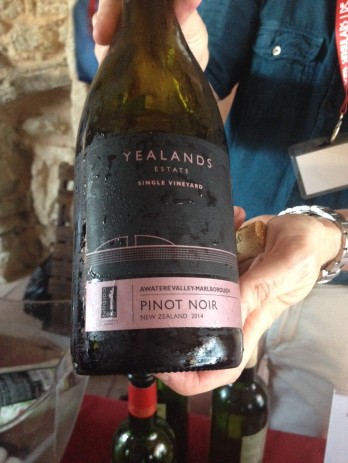 We met Fabio Bartolomei at a bloggers tasting in Requena some six years ago and he was showing his Vinos Ambiz selection from Avila. We started here with an Airen, 2016, a pale rose white wine, the colour being due to a bit of oxidation. Fresh and quite distinct and very different to the second wine, a Chasselas Doré, a native variety of Switzerland and also grown in France and Germany. Fabio has 2 plots of these vines, practically unknown in Spain, which produces a fruity, grapey wine, cloudy because Fabio does not filter his wines. 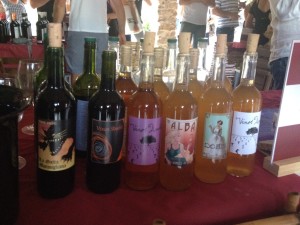 His white Albillo Real had wonderful expressive fruit and toasty notes on the nose although this is one of the wines he produces in terracotta tinajas. The 2015 Garnacha has had a short pass through barrica with several years of age. Nonetheless it still showed notes of the malolactic fermentation, creamy. Finally we tasted the 2010 Tempranillo, with lots of wild blackberry fruit, soft and round with a long fruity finish and still well alive. ( Vinos Ambiz, wines of small production.)

From the Marina Alta we again tasted the local wines of Joan de la Casa which we reported on in our post on a tasting of wines from Alicante. This confirmed our view that these unusual wines from Moscatel and Giró will be on our list for future tastings.

From DO Valencia we tried the wines of Terra D´Art, from the hamlet of Ahillas high above Chelva in the Serranos. Since we visited a couple of years ago Juanjo Martinez has been quietly developing his range and winning awards! 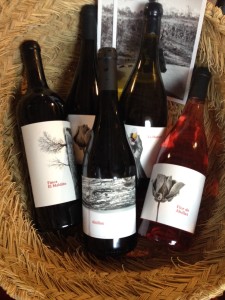 The Rosado is exceptional, a blend of 5 varieties ( Monastrell, Bruñal, Garnacha, Bobal and Tempranillo). It has a pale rose colour with a very expressive nose and a lovely acidity and long finish reflecting the poor soils of the area.

His whites are from Merseguera. The Flor de  Ahillas 2016 has two months crianza on its lees in stainless steel and is light, fresh  and expressive. The 2015 (La Madura) is a different affair. From old vines, it has four months in barrica and on the nose has that scent of `mandarine poudre´a citrus note of slightly going off tangerines. Very attractive and elegant.

The reds are also distinctive. The Ahillas Tinto is a blend of Bobal, Tempranillo, Mencia, Marselans, Graciano, Prieto Picudo and Garnacha!With 12 months in French and American oak, it is cherry red, with fruits of the forest on the nose and lots of terroir in the mouth. The El Maldito 2014 is Bobal and Tempranillo and is medium bodied, cherry red and expressive with plenty of Bobal characteristics on the nose. In the mouth strong fruit, vanilla round tannins and a long finish. http://www.bodegasterradart.com 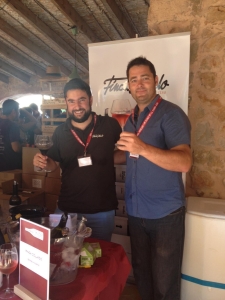 A brief visit to the stand of Finca Collado to congratulate them on recent awards of Cepas de España awards ( Gold for the 2015 Chardonnay/Moscatel and a Bronze for the Delit 2013) and to Jose Guillamon and Vicente Flors representing IGP Castellon and it was time to catch the bus back…..but although brief, this had a been a tasting rich in varieties of grape, styles of elaboration and a valuable opportunity to taste wines from overseas  with distinct varietal characteristics….all from producers who care about the environment, their vines and the quality and natural nature of their wines. It is what makes tasting so interesting  and varied! 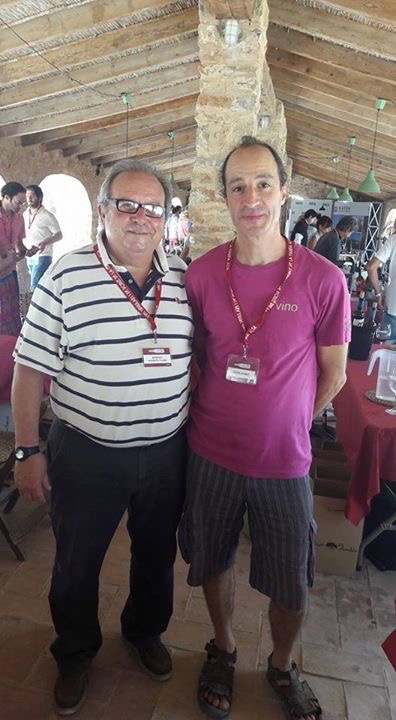