The gastronomy competitions roll-on and Monday last (23rd October)  the competition was in Llutxent for Arròs Caldós with sixteen restaurants chasing the crown for this very traditional Valencian dish.

Llutxent is a small town in the beautiful Vall D´Albaida valley on the main road between Xativá in the interior  and Gandia on the coast. Small it may be but it has a long and interesting history and is worth visiting if you are in the area. From Roman beginnings the town has been erased, grown again and played its part in the various internal wars in Spain’s history. There are walking routes, a castle, a monastery, several ancient lime kilns and other sites of interest to keep the tourist busy.

The Corpus Christi Monastery, believed to be the site of one of the oldest Universities in Spain and dating to 1422, was the venue for the competition which is held in the impressive 18th century cloisters. 16 restaurants took part but success in one competition is no guarantee of a podium place  in the next one………neither La Visteta (winners in l´Alcudia) nor Casa Granero (winners in La Valldigna) were even placed in this one as we shall see later!

So, Arròs Caldós. What is that then? Essentially it is a stew, cooked with olive oil in a `honda,´ a casserole or a `perol´ (as used for Alli Pebre). 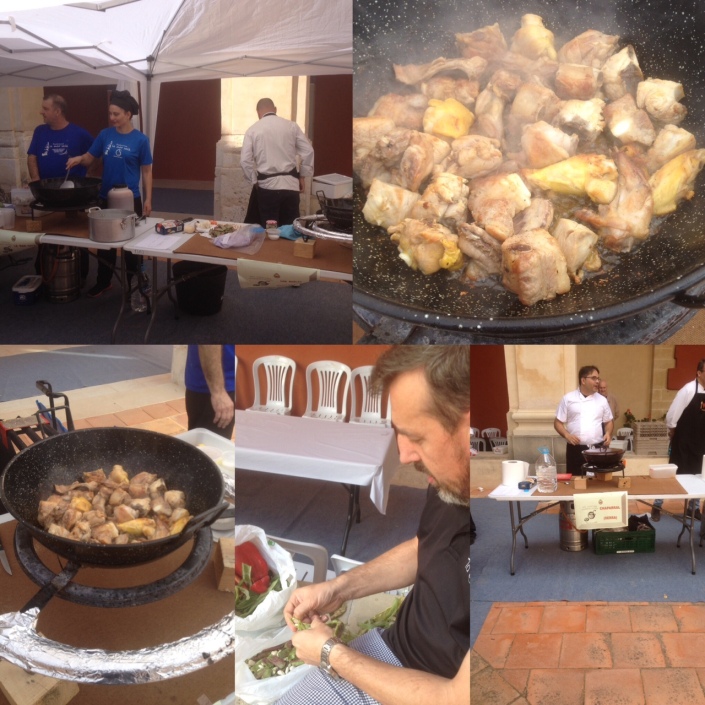 The traditional ingredients for this dish are pork rib, chicken and rabbit cooked with tomato, pimenton, garlic and vegetables. The stock is always home-made and confected with the ingredients but the rest is ‘freestyle’. In this competition the competitors used a selection of root vegetables ( turnip, parsnip, potato,) red pepper, green beans and Lima beans, mushrooms (trumpets of death and saffron caps) artichoke hearts and flavoured additionally with rosemary and or truffle shavings. Some added snails. The final ingredient is rice (traditionally the varieties of Albufera, Senia or Bomba are used) but more stock than would be used in a paella is necessary.

The day starts with an almuerzo shared between the press, officials and the competitors. Then cooking starts at 11.00am. The meats are fried off first, then the other ingredients added depending on their cooking time.

VÍ Vid can attest to the fact that the jury had a hard choice as having followed the preparation, cooking and  presentation the dishes were returned from the judging areas to the cloisters where the gastropress and public enjoyed sampling them all!

It is said there are four key elements to the dish. The first as always is the quality of the ingredients, the second the sofrito which begins to build the flavours in the stock, the third is the technique and the fourth, as with all Valencian cookery the soul of the chef!

A key element of the technique is understanding  the ratio of stock to the rice. Paella rice varieties absorb the liquid and flavours of the stock and normally in a traditional  paella between two or three times the volume of water to rice would be used. In Arròs Caldós this is increased to up to four times so that the dish is presented in a stock. Too little water and the rice will be dry and too much and the stock will have insufficient flavour.

At lunch in the cloisters.

Following the judging the Town Hall provide a lunch for the competitors, press and the judges and official guests. This consisted of a traditional Valencian Salad, an arroz, turron ice cream and wines by Bodegas Nodus ( Capellanes).

There is no parallel competition for desserts in this event so the winners of the XIV Concurso Arròs Caldós were:- 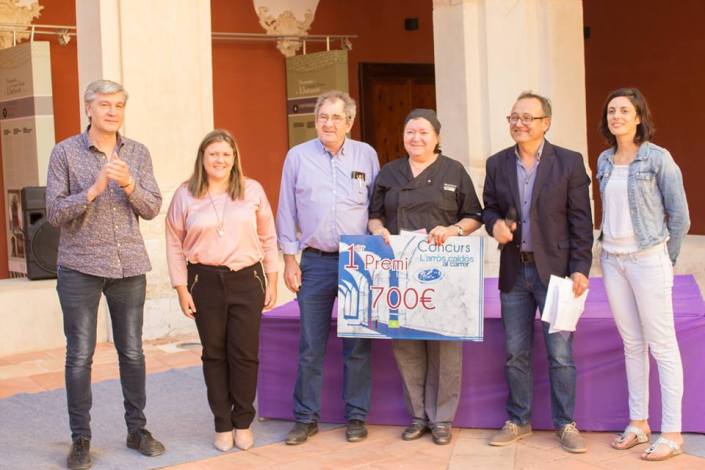 The Winners! Isabel and Paco from Nazaret, Puçol.

The restaurants marked with a (*) are participating in `Regreso a la Cuchara´, an initiative which sees 43 restaurants across Valencia offering a three course meal with 2 glasses of wine from Bodegas Sebiran from 20€, a great opportunity to taste traditional dishes such as Putxero, Arros al Horno, Arròs Caldós or other stews. Full details on Facebook, Comer en Valencia, Regreso a la Cuchara. The menus are available until 5 November.

The next concurso is in Bocairent in late November. VÍ Vid will report on this competition for dishes involving game and wild mushrooms (Carne de Caza y Boletus) and a salt cod, potato and spinach stew ( Borreta) typical of the Alcoyana area.