Unusual in the canon of Valencian Gastronomy but for once this  was a competition  actually held on a Sunday attracting 28 restaurants as competitors despite this being one of their busiest working days.

But then everything is a little unusual when it comes to Espardenyá.

Espardenyá is a relatively modern dish according to our good friend Paco Alonso, created around the beginning of the 20th century by mistake and in his view ‘if there is one dish capable of promoting disorder and chaos it is espardenyá’.

History has it that a group of rice harvesters met regularly to share a meal, sometimes a paella, on other occasions a fidueà or an Alli Pebre. Each would take an ingredient for the agreed dish. However,  one day the messages were confused and some thought it was to be a paella others an alli pebre. Nonetheless, once gathered together they decided to mix some of the ingredients and the resulting dish  proved to be an unexpected success (or  Espardenyá in the Valencian language)!

Some ingredients, Eels, eggs and a ‘picada’.

So what  constitutes this  chaotic plate? Firstly chicken and rabbit, (duck is also permitted,) then eels, pimenton dulce (with or without a guindilla) and potatos (sliced or in small chunks) . Thirdly a ‘picada’   of almonds, the local nuts (cacahuetes) garlic, parsley and bread (optional). The dish commences with the frying of the chicken and rabbit in virgin olive oil and then as the dish progresses water is added to make the stock and to cook the eels and potatos. the picada is added towards the end. Rice is not used so the picada thickens the stock. Finally when it is ready an egg is poached on the top, one for each person.

It is traditionally cooked over wood in either a paella, a honda ( deep pan) or a perol (iron casserole).

This is not a widely known recipe according to Paco Alonso, coming from  the towns of the Ribera Baixa around the Albufera and the rice fields. But it has been claimed by Alcira, capital of the Ribera Alta (the next door county). This competition has been dedicated to Francisco José Garciá who had an affinity for the dish and was a well-known and respected market stall holder in the town.

Today the competition´s organiser is Herminio Crespo, journalist with Noticias de la Ribera, who coordinated an excellent event with the town hall and the Government securing the highest first prize for a ‘concurso’ of 3000€ for the winners! It was he who invited VÍ Vid to participate on the jury on Sunday. 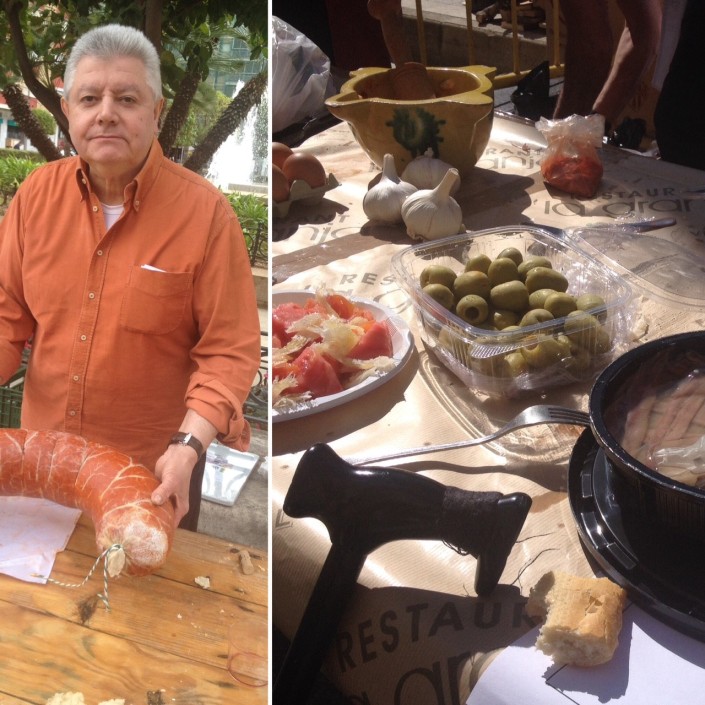 Before the competition starts there is  a  traditional almuerzo which the jury, press and contestants share. Once preparation commences individual contestants carry on with their ‘breakfast’ until the cooking begins.

During the cooking the local association of bakers (Gremio de Horneros) dispensed artisan breads to the public along with the cake most associated with Alcira ‘La Regaña’ which is a type of Panquemado, rich with pumpkin in the dough. It has a saffron coloured centre.

What had started as a bright sunny morning soon changed   with arrival of the tail end winds of Tropical Storm Felix which tried to introduce its own form of chaos! The 28 contestants (whittled down from 50 entrants) had to  control their fires whilst the gusts of wind tried to put them out, disperse anything that wasn’t tied down around the Plaza del Reino and generally made  laying the tables for the lunch afterwards impossible!

The jury retired to the designated marquee only to enjoy some further disorder as the wind tried to lift it away. Outside a  band struck up playing some loud but excellent paso dobles and the nearby 2 o’clock mascleta suggested World War 3 was coming. Yes, Valencia is enjoying  it´s Spring festival , Fallas !

Still, despite all the distractions, the chefs are made of sterner stuff and the finished entries began to arrive for consideration by the jury who soon were concentrating on the food in front of them. This is certainly not the first time we have been on a Jury and we know to expect a wide variety. The espardenyás did not disappoint in this respect.

Without giving any secrets away the finished dish should resemble rather more an alli pebre than a paella. The stock should have good colour from the pimentón ( though not to be so strong that it dries the throat); the guindilla should add a little heat if used; the picada should not absorb all the stock leaving the dish dry or nearly dry; the bottom should not be burn´t;   the potatos should be firm  (not turning to mash) and the flesh  should ‘spring’ from  the eels when pressed.

Apart from the ingredients above no additional elements are permitted and it has to be said that , on a very difficult day for open air cooking,  the contestants did brilliantly presenting us with some excellent and widely varied entries! Those who used paella pans  were more prone to the stock evaporating during the cooking, (4-5 entries were dry or practically dry), those who used bread also risked a thicker sauce and  one or two were burn´t on the bottom. One had overdone the guindilla!

Judging seemed to pass very quickly and after the deliberations were over  we joined the contestants, public and press at the lunch now laid out on trestle tables down the street until the scores had been  counted and verified.

Then  the awards ceremony could take  place.

This contest proved to be a huge success and great fun in the chaotic circumstances, no-one batted an eyelid and Espardenyá lived up to its reputation! Congratulations to the winners, all the contestants, the sponsors ( Gandia wines and San Miguel cervezas) to  the town hall for their organisational skills and support and to Herminio for the invitation to participate as juror. 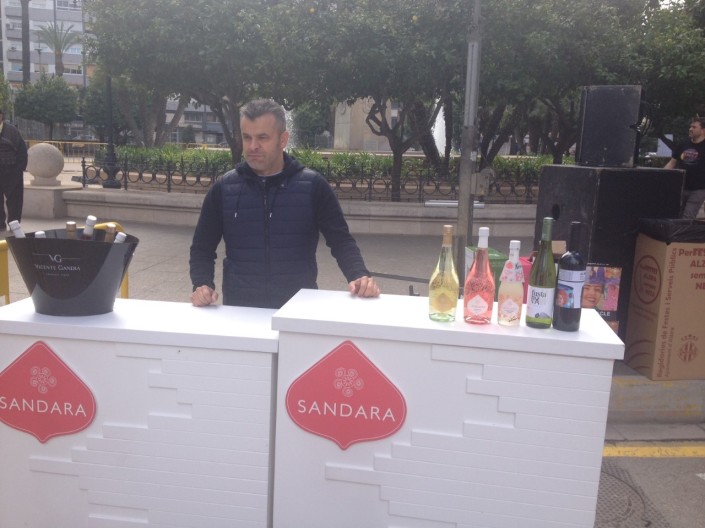