An eclectic mix of activity for VÍ vid this last week!

Firstly a seminar on three of the rice varieties which are used in Valencia organised in las Arenas hotel with participation of the 18  restaurants taking part in the III Jornadas Gastronómicas de Arroces Marineros  Playa de Las Arenas.

Those attending learned at the hands of Santos Ruiz, Head of the DO Arroz de Valencia the basic attributes of rice in general and  three varieties in particular (Bomba, Gleva and Basmati.) We also heard in what sort of dishes they should be used, and sampled three examples cooked in the hotel´s own kitchens.

The rices were provided by one of the growers, La Campana, who are credited with introducing both Bomba and Gleva into Valencia.

Anyone who has ever cooked a paella will know that Valencia´s flagship gastronomic dish is difficult to do well. In fact it is a recognised fact that it is the most difficult dish in the canon of Spanish cookery to prepare. It is affected by the type of rice used, the proportion of water to rice, the size of the pan, evaporation rates, air pressure and a host of other factors. Cooks will tell you that it rarely takes the eighteen minutes it says on the packet, once the rice goes in. Few realise that rice has several other properties that affect the way the dish tastes, both texturally and flavourwise.

The third dish was a more recognisable paella cooked with the Bomba, wild mushrooms and free range chicken. Bomba is served drier, loose and with all the stock and flavour of the ingredients locked in. It can stand `over cooking´ to caramelise the rice at the bottom of the pan into socarrat, much favoured by Valencians. This dish had achieved that.

The three dishes were accompanied by wines from Bodegas Nodus and commented on by José Manuel Sanchez, Sumiller . The Basmati and sea bass was accompanied by the bodegas  Brut Cava, a blend of Macabeo and Chardonnay with nine months crianza on the lees. On the nose it is light fresh and notable for its apple and almond notes and light patisserie. In the mouth it has well integrated bubbles and is fresh.

Second the Chardonnay 2015 accompanied the arroz meloso. This is straw yellow in colour with lots of tropical fruit on the nose. In the mouth it is rich and full.

Last but far from least  we attended the launch by Bodegas Vegamar ( Calles- DO Valencia Alto Turia) of their new flagship wines Esencia. 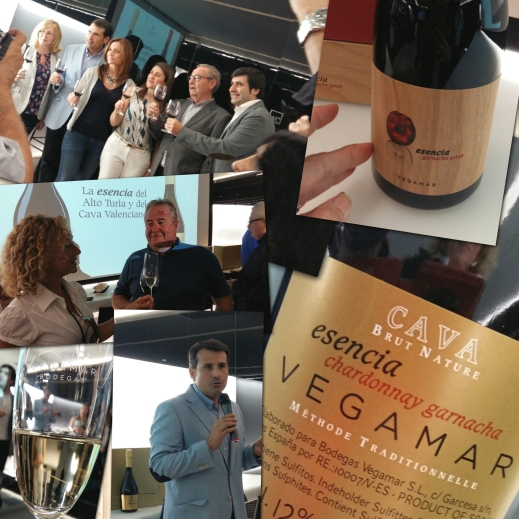 The bodega which is part of Grupo Disber have introduced a new top of the range Cava and a new red.