In March 2017 Dacsa, one of Valencia’s leading rice producers held the first ‘Paella League’, a competition ostensibly for amateurs and VÍ Vid were very happy to attend and report on the first day of the event   https://wp.me/p7dfvi-Hq . Paella is the heart and soul of Valencia, loved in its varying forms by all, cooked every weekend by Valencian families and everyday in restaurants and bars across the community. 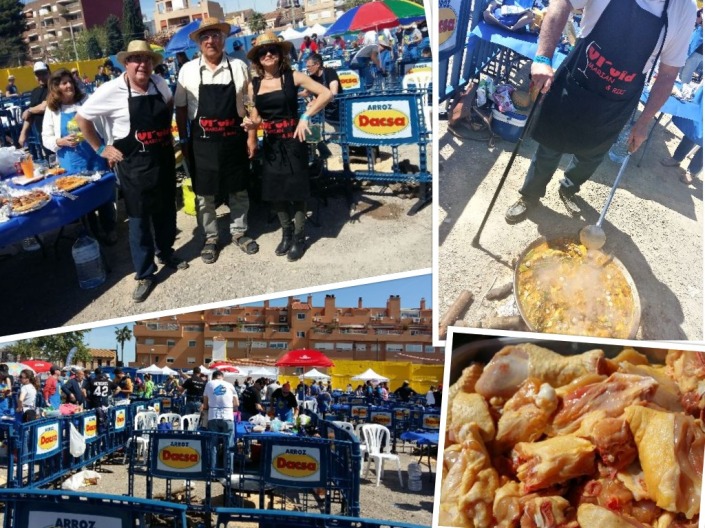 In what proved to be one of the most enjoyable days we spoke to organisers, judges  and contestants alike and you could not help but be impressed by the seriousness underlying the spirits of everybody who was selected on that first day. So, when Dacsa announced they were continuing with the league and creating a new competition for 2018 VÍ Vid could hardly ignore it and we resolved to enter our own team, under the name of ‘El Desafio Ingles’ , or, the English Challenge. 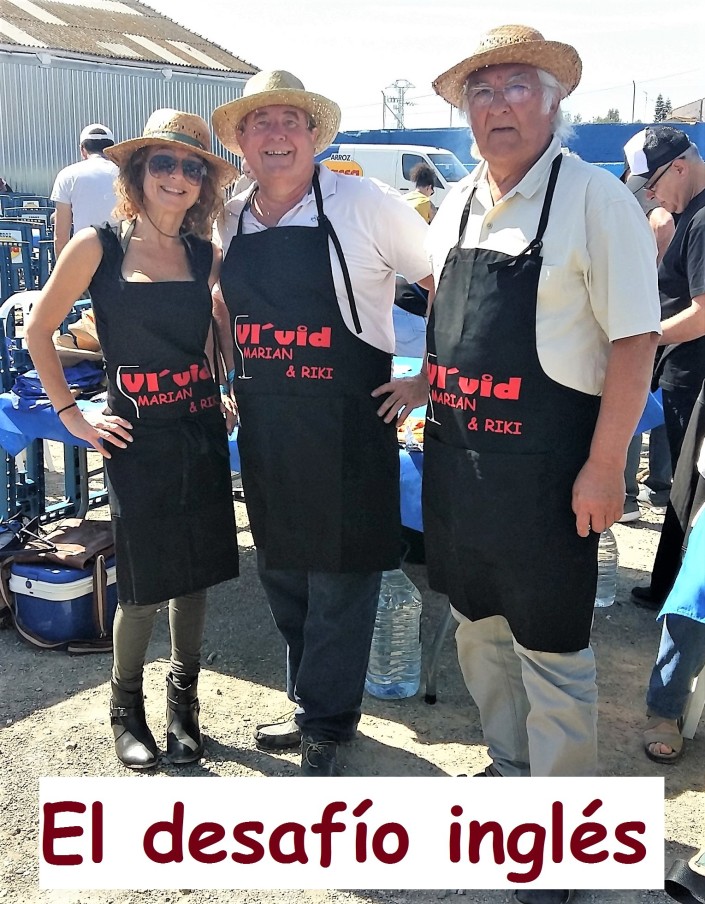 The rules this year are broadly the same as last. 100 teams of three are selected from those who apply for the first day and a further 100 for the second day at the end of the month. Of these, 10 winning teams from each ‘semi-final’ are selected to cook in the Grand Final in May.   Much to our amusement, and pride, we were indeed selected to cook on the first day and we invited Graham Mitchell, a close friend who has a mastery of the blowtorch,  to cook  with us.  The paella is cooked in the traditional way over a fire of orange wood and Graham´s job was to ensure the fire was low when required and raging when needed to boil the stock and cook the rice for first part of the cooking period.

The sense of excitement was palpable as we arrived in Almassèra, home to the Dacsa Stadium and unbelievably we found parking spaces close to the entry ( there is a lot to carry). We joined the queue of contestants waiting to register, shuffling up the street , turn by turn as the teams entered the competition area.  Inside, registration completed, we headed for bay 81, our ‘home’ for the next few hours and unloaded the cooking equipment, the  ingredients, our almuerzo, supplies of drinks etc! The area contained three chairs, the wood to cook the paella over and a table on which to unload and then display our entry later. Time seemed to fly by, announcements came over the tannoy with rapid regularity…reminders of the rules and the time in which to cook and then suddenly the countdown had finished. 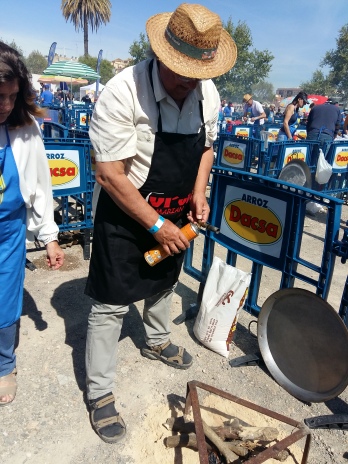 As the fires were lit and got going the other side of this competition emerged. This is the part where the teams introduce themselves to their neighbours, find out which ‘regional version´of the Valencian paella they are cooking and start swapping almuerzo with each other. This is also the point at which you discover it is not purely an amateur

competition, but one where local bars and restaurants have a surprisingly high representation albeit using an ‘alias’ as a name! Our neighbours were from Manises, (cooking the traditional variety) The Ribera Alta, (cooking a version with red peppers) whilst we cooked a traditional version from the Camp de Turia which has snails in it. Across the aisle were a team including policemen and an army officer using artichokes in their paella ( permitted when the Lima beans are not available). As we got on with cooking ours,  more and more competitors came for a sneaky peek at their neighbours efforts and there was genuine shock when some of them realised there was an ‘English’ speaking team amongst them! 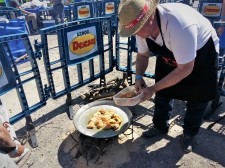 enough, the salt content was right and the time for putting the rice in and achieving a 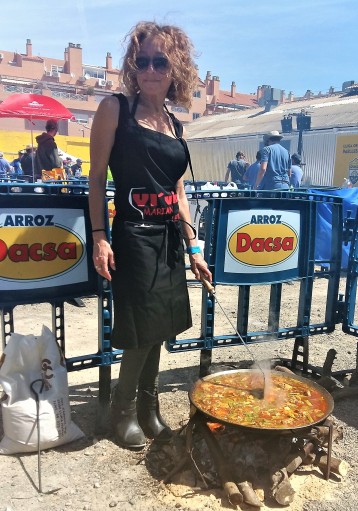 At this point the most common comment is ‘que buena pinta’ ( or ‘how good that looks’) .                      The paellas are lifted from the fires and displayed on the tables with an Official number and the judges visit each bay, talk to the team, pass on their comments and leave. At which point family and friends are allowed into the area to share the paellas with the teams, the inevitable post-mortem discussion takes place (everyone there is a total expert of course!) 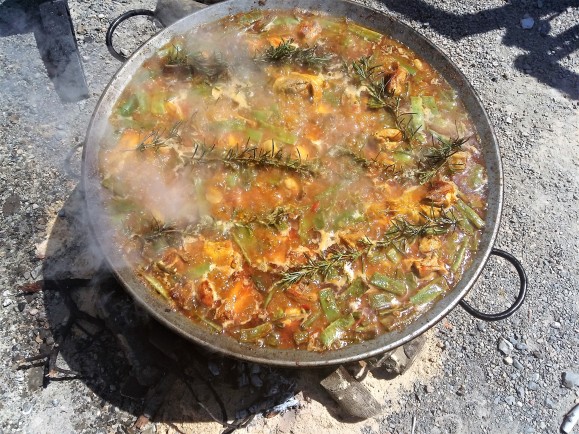 For the record our effort was highly praised for its flavour by the judge, but we didn’t 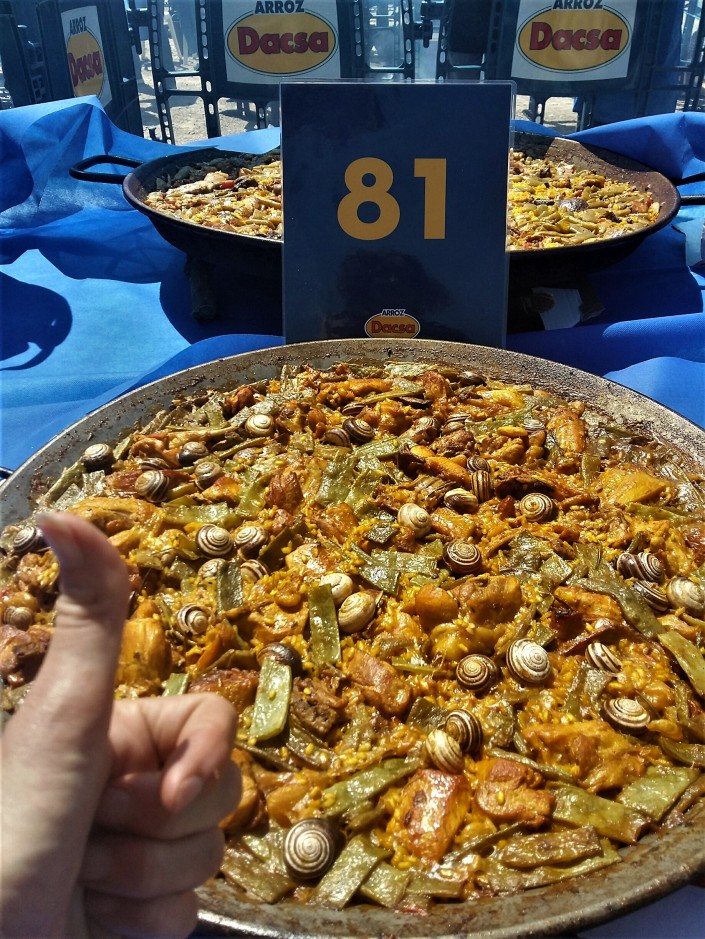 make it through the selection to the final because we had not produced quite enough ‘socarrat’ the golden crunchy bit on the bottom highly prized in Valencia.

The event was co-sponsored by Vicente Gandia wines, Alba Palitos, Coca Cola and Amstel, the latter two particularly welcome on a day with temperatures in the 30’s before the fires were lit!    Exhausted we sat and ate our entry with 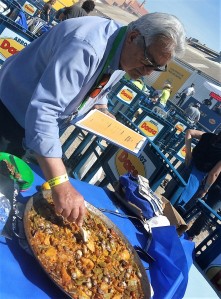 year and can only thank Dacsa for a well organised day and a hugely fun competition. We hope to report on the final at the end of May.