Situated on the Las Arenas beach, a privileged location by the city´s port, The Marina Restaurant is Marina Beach Clubs great gastronomy challenge, the reference leisure and restaurant complex in Valencia.

Sebastian Gros, the French Executive chef with more than 20 years experience is responsible for designing and executing a project based on the best Mediterranean produce and Valencian traditional cuisine with a cutting edge. 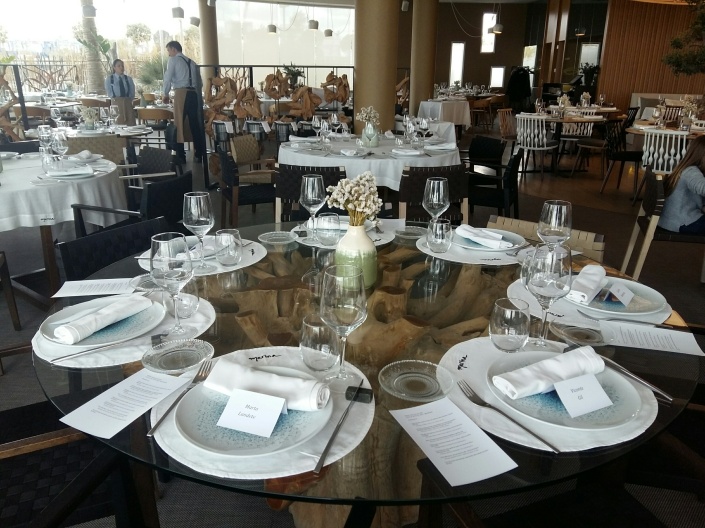 With two years of activity the Marina Beach Club has established itself as one of the best, is the only one of its type in Valencia, a city which has experienced an unprecedented culinary and cultural ‘take-off’ in recent years. It is precisely this cultural pride which led the Recaba Group, responsible for the Panorama Restaurant located on the Marina, the upcoming 5* Grand Luxury Hotel on Las Arenas Beach and a surprising and impressive restaurant in the city centre to launch this all-Valencian project. Of all these interconnected propositions it is the Marina restaurant that best represents the regions rich cornucopia making excellent use of its pantry and demonstrating that haute cuisine can be framed in a beach club atmosphere. 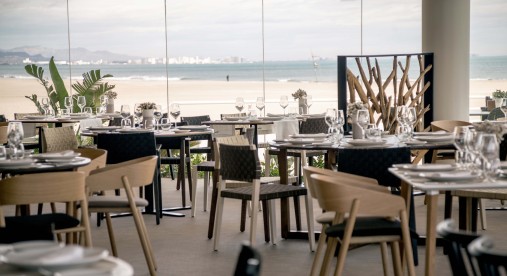 NATIVE  PRODUCT AND RICE WITH OWN HALLMARK

The menu is a road-map of authentic Valencian cuisine, with selected products and age-old cooking methods, to discover hand in hand with Sebastian Gros, the Executive Chef. 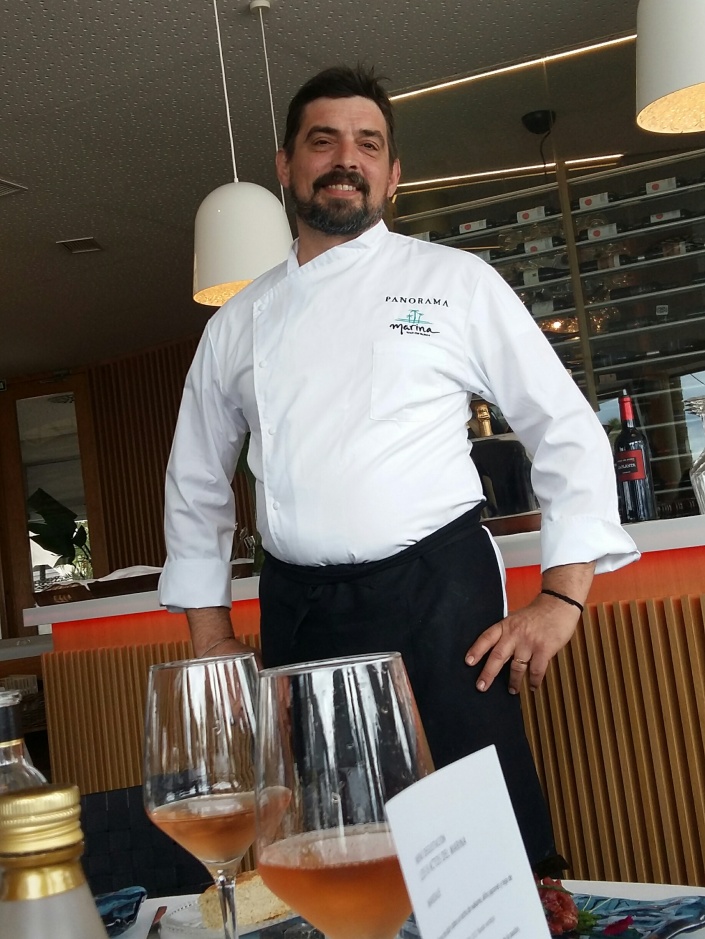 Born in the city of Oyonnax, close to the French Alps and where his grandfather ran a Michelin-starred restaurant, Gros arrived in Spain after developing part of his career in equally starred restaurants in his native country, such as Chez Roger, Château Eza or Le Rivage But it was in Valencia where he decided to settle, captivated by the climate, the Mediterranean  and the potential of its emerging culinary level.

Now, Marina has a team of 24 people and has renewed its offer under the following premise. the fresh and seasonal product as the protagonist, and the traditional recipes reviewed -without skimping on creativity  Thus, we find dishes such as “esgarraet” with quince all-i-oli, artichoke roses with honey and truffle vinaigrette, various  scrambled egg dishes  (with crayfish, prawns and leeks) and other ‘straight  from the sea’ appetizers, such as mussels, clams or cuttlefish, in different elaborations. The Valencian imprint can also be seen in the tomato salad of El Perelló which is served with tuna loin or in the Mediterranean sea bass ceviche with granita of ‘Agua de Valencia´. 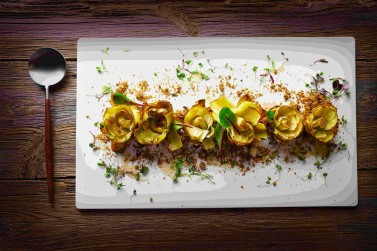 The taste of Gros for the sea and the mountain is evident in dishes such as calves sweet breads and grilled red prawn and in the wide variety of meats and fish that swell the menu. All this is accompanied with home baked breads (focaccia, brioche, rye, etc.) and finished off  with refreshing and sweet homemade desserts prepared by a chef patissier, such as tiger nut horchata, “valencianito” (orange juice with vanilla ice cream and Grand Marnier) or caramelized orange toast. Special mention should be made of the rice, whose elaboration is led by its own maestro, that of Juan Carlos Galbis, the first chef to receive a Michelin star in the city of Valencia 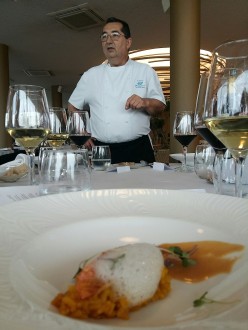 and the son of the rice cook Antonio Galbis who has defended the original recipe of ‘Paella Valencia’ and whose work has contributed to its internationalization. In Marina the authentic version is served: with free range chicken, rabbit, snails, artichokes in season, green beans and garrofó (Lima beans) In addition, with  the advice of Galbis, the menu incorporates ‘Jornadas’  (or fortnights) of rice varying between dry and moist, traditional and creative. Among the highlights are ‘arròs dels bous ‘ (with red mullet, monkfish and cuttlefish), which takes its name from a peculiar technique of trawling with oxen, which emerged during the eighteenth century on the beach of Cabanyal and which died out at the beginning of the twentieth century.

In addition to its regular menu, Marina presents three different formulas to discover the full range of dishes:

* An off-menu with up to eight suggestions that vary each month.

To complete the gastronomic experience, the restaurant has an exceptional wine list – in which there are up to 180 references – inspired by Spain but open to the world, with numerous international labels. 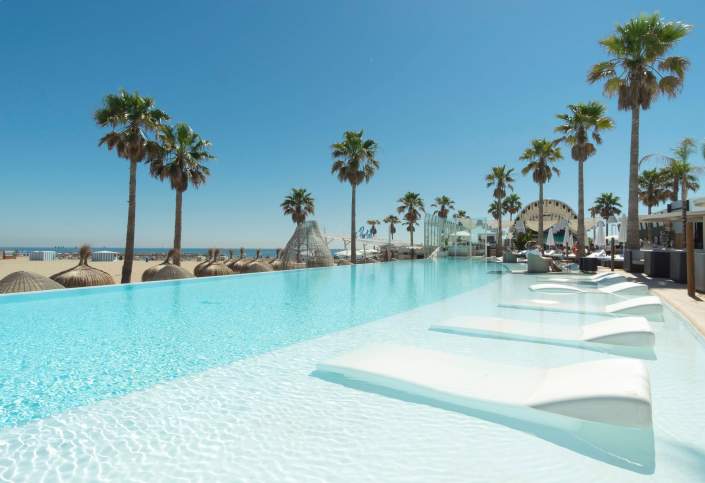 The main building houses  ‘Sky’ (an exclusive terrace for private events) and the Marina restaurant, with a circular floor plan and  panoramic views of Las Arenas beach and the  port’s pier with a capacity for 150 diners. It has been designed and decorated by the architect Juan Ranchal and the interior designer Janfri. 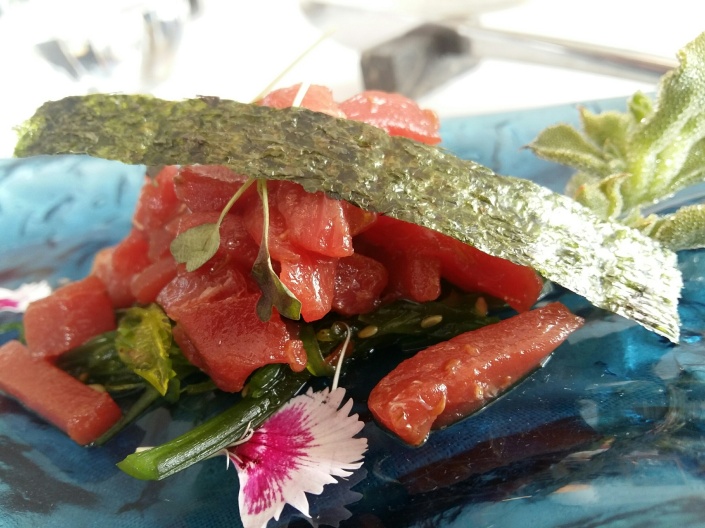 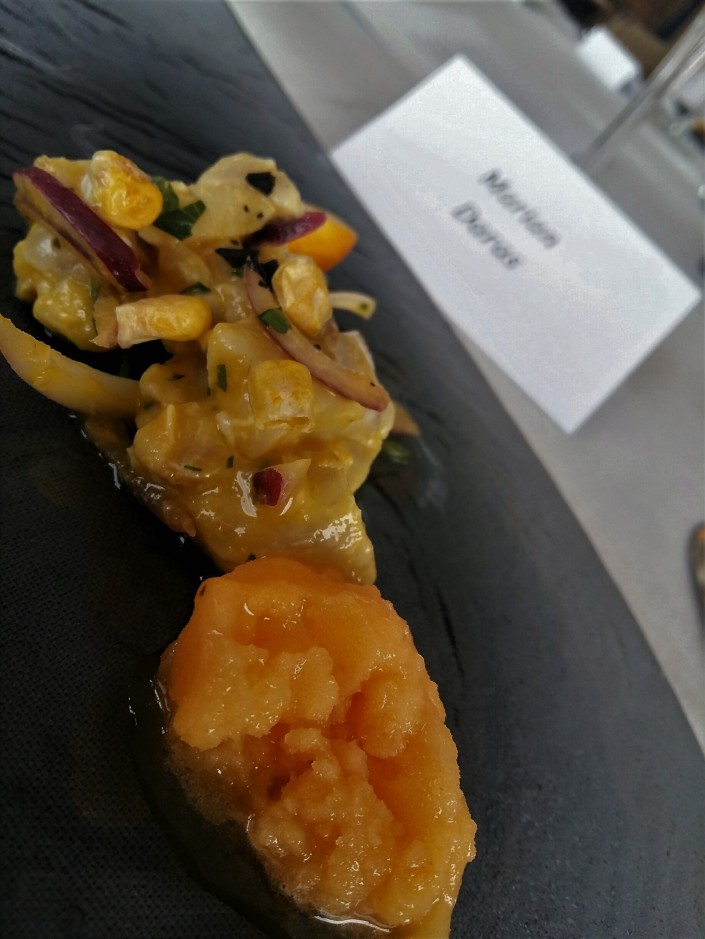 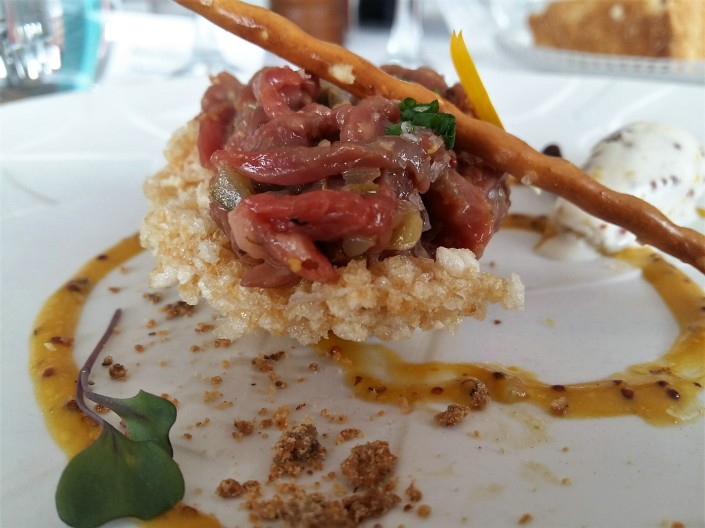 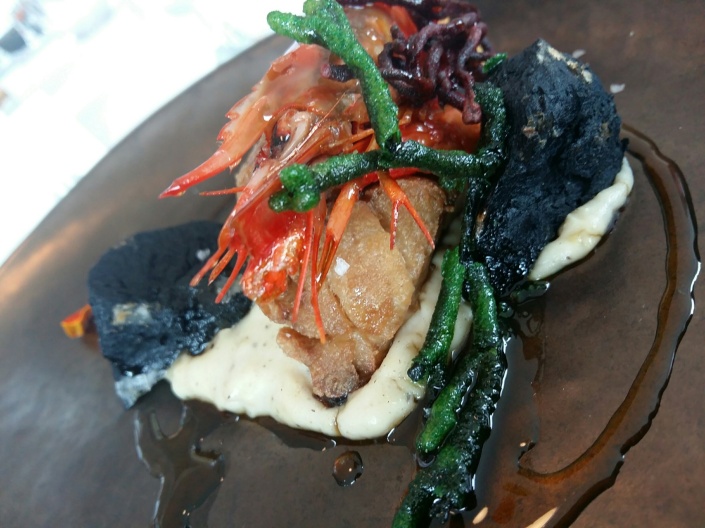 Roasted octopus, cooked as “a feira”, over cream of sweet potato. 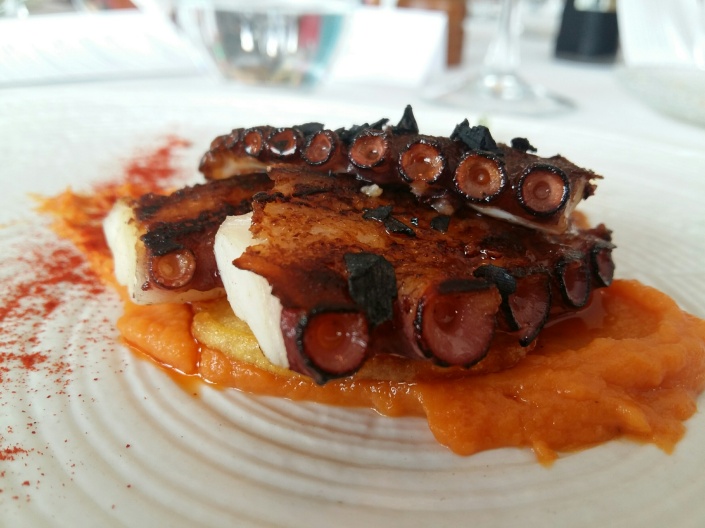 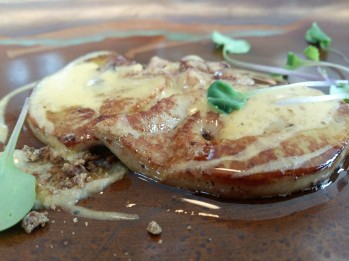 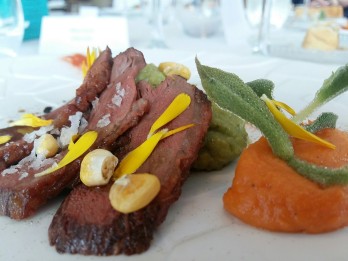 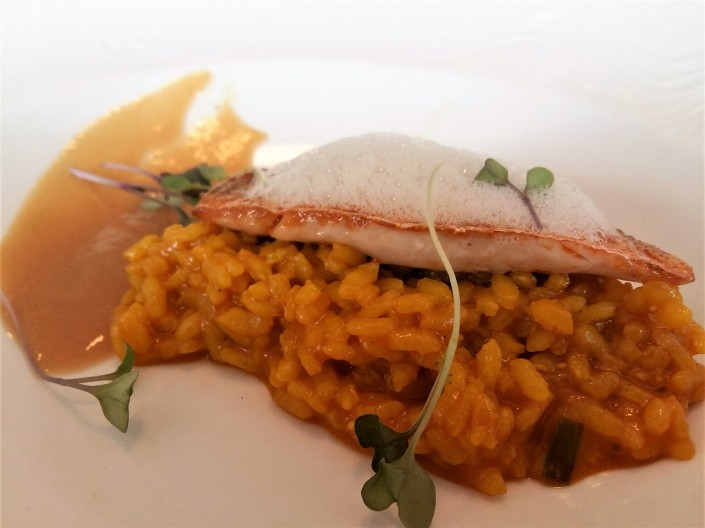 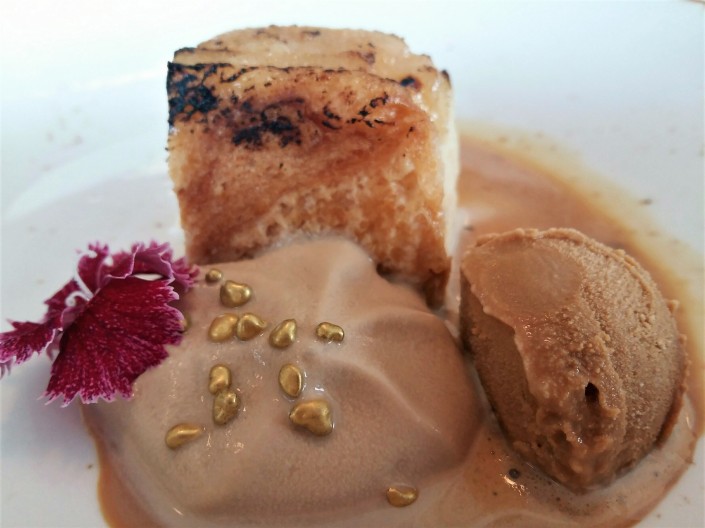 The wines which accpmpanied the dishes. 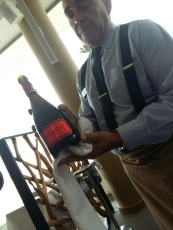 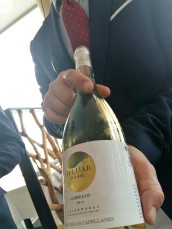 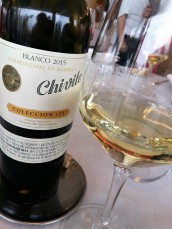 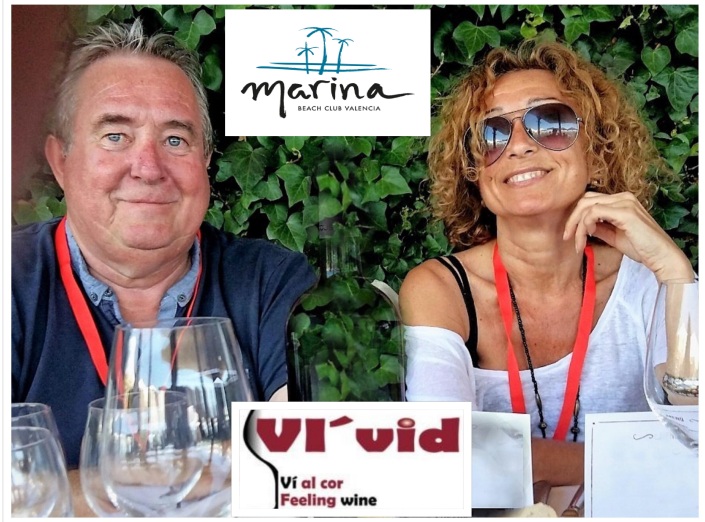