In keeping with their over-arching responsibility for the quality of Sumiller training and examinations and the bringing together of the Provincial associations FASCV, (the Federation of Valencian Sumiller Associations) often hold tastings which  VÍ Vid is very pleased to be able to attend and report on.

Last week was one of those occasions and brought together Jean-Philippe Sendat (European ambassador to Spain) from the Association of European Sumillers (ASE) and David Remolar Ramos who is current President of FASCV.

The tasting had been organised to introduce the ASE to members of FASCV and was an opportunity for a tutored tasting of five wines from the Valencian Community. The tasting was held in ‘La Cuina de Sabors’ in Vilareal, the restaurant run by David and his partner. 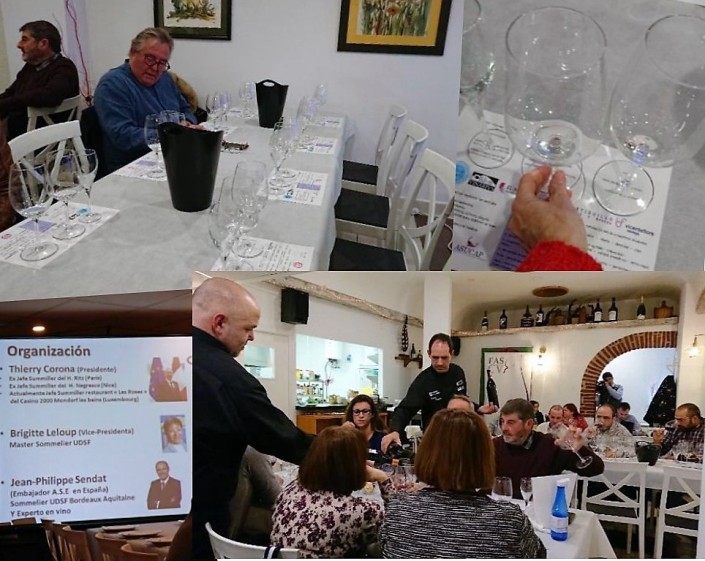 The ASE is a European Parliament funded body headquartered in Luxembourg. Since their inception thy have grown to be present in 18 countries and Jean-Philippe is Ambassador to Spain.

ASE was created to adapt the profession to the evolution of the wine economy and accepts that the golden days when French wines were ‘simply the best’ are over and that now is the time to adapt to new influences and recognise the rapidly improved quality and new styles of wine from the rest of the world.

The globalization of the wine market brings new challenges and customers who demand more variety and Sumillers need to keep up with these developments whether they be New World Wines or even those from China and emerging markets.

The profession of Sumiller is not as highly rated in some countries as it is in France where every restaurant worth the name has one. Here in Spain the profession is highly recognised but the reality is that in too many restaurants the economics do not permit the employment of a specialist and all too often the task is delegated to a waiter.

ASE is dedicated to transmitting to future generations the knowledge, techniques and traditions of the culinary arts as well as the proper techniques of serving wines. Today as a result more French sumillers train in other countries and vice-versa and we must not forget Valencia´s own Bruno Murciano who was Sumiller in the Ritz in London for example before returning to make his own wines.

ASE has created a Certificate of European Sumiller to promote this wider knowledge and quality of the profession.

Jean-Philippe himself (Bordeaux ’75) has been Ambassador since 2012. his philosophy is summed up as ‘To be a good Sumiller you need to have a lot of passion, humility and be capable of continuing to learn. The world of wine in general is continuous learning, wine is our culture and is there to be enjoyed’.

A view with which VÍ Vid whole-heartedly concurs!

The first two were from Victor Bellmunt of Ildum Vinarius in Cabanes, Castellon. Victor has made a name for himself producing sparkling wines in a province with no tradition and which are outside the DO Cava. His Methode Tradicional wines ( Cava in all but name) have won awards in the Proava organised Concurso de Vinos Valencianos for the last three years and this year his new Ancestrale wine was highly commended. 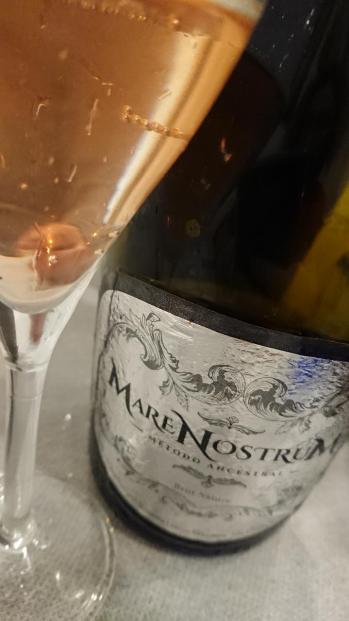 We started with the Garnacha Ancestrale 2017, which had been a big success in the recent Gastronóma exhibition. It is an unfiltered un-clarified sparkling wine, pale salmon in colour, slightly cloudy with fine persistent bubbles.

On the nose it is grapey, with rose flowers and red currant fruit, well-balanced in the mouth, with  lot of fruit and balancing acidity. Fresh, it would accompany a good fiduea well.

The second was Victor’s Ancestrale from Embolicaire, a local grape variety. This was from 2018 and with 5 months in contact with the lees it had been disgorged that morning. Clean and bright with fine bubbles, also salmon in colour. On the nose green  strawberry, citrus notes and secondary notes of light yoghurt. In the mouth clean and fresh, drier than the Garnacha and probably better as an aperitif with a long dry, slightly peppery finish. There are just 1200 bottles of this available.

Next up was a pure Macabeo from El Mollet, Roques Negres from 2017. (12.5%ABV) With good legs, this white is golden-yellow clean and very bright. It has ripe red apple on the nose with white flowers and is medium intense.

In the mouth apple, pear, ripe fruit it evolves with tropical fruit notes balanced with a good acidity and a hint of bitterness in a long full finish. Juan Carlos Pavia always manages to produce a good white from this variety whatever the weather throws at them! 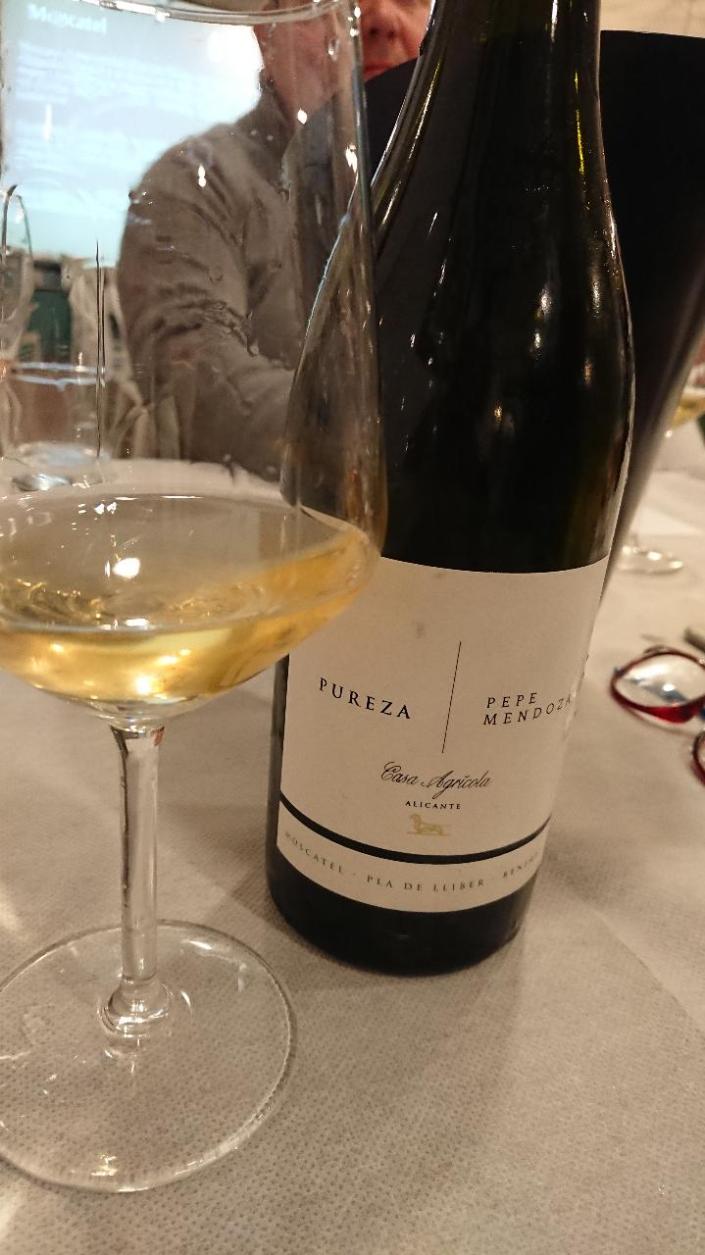 Pure gold in colour, clean, bright this is from the Pla de Lliber in the Marina Alta. On the nose citrus notes, grapefruit and grapefruit peel, fennel with white stone fruit , apricot. In the mouth very ripe grapefruit notes, lovely acidity, very dry long satisfying slightly salty finish. This is a wine which has had 60 days of maceration then fermentation with the skins and stalks in terracotta , then five further months working on the lees. A stunning wine!

We turned to the Vicente Flors, Monastrell ‘Flors M’ from 2016.

This wine had been decanted as Vicente gives his wines only the lightest of filtering. Medium to full-bodied cherry coloured wine with very long slow legs. From old vines on sand and gravel soils the wine has not undergone a cold stabilization and has a very expressive nose, ripe fruit, red and black, with a malolactic cremosity.

In the mouth it is a powerful wine with a lot of potential, ripe cherry, figs, damson, plums, well-structured, well-balanced and then a very long finish.

We finished with a Bobal from Utiel-Requena, Finca Terrerazo 2016 from Toni Sarrion. 14%ABV this is a bright purple wine with violet edge, with very long, very slow glycerinous legs, colouring the glass. Very fruity nose very deep red fruits, young and fresh. It has hints of the surrounding countryside, herbs, pines, pin-oak trees, and is very  complex in the mouth, with huge depth but needing a lot more time in bottle before approaching again.

This was an educational tasting with two professionals who nonetheless speak the language of the student. It was a pleasure to meet Jean-Philippe, albeit briefly, and to spend time with FASCV again. Six interesting wines of very high quality, something the rest of the wine-world needs to understand is normal here in Valencia.