Some significant wine and food events took place in Valencia in this week  and we have been to five of them. The first was Coopera2, a celebration of the major Cooperative bodegas throughout the Valencian Community held on the 28th November.

Officially entitled Coopera Vinoselección, the event is an opportunity for the Bodegas involved to show their new wines, often specifically made from regional varieties and which in the last year have won a considerable number of awards between them.

Once again the venue was the Palacio de los Mercader which is the HQ of the Cooperative movement. 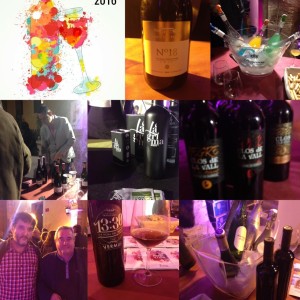 Amongst the participating Bodegas were Bocopa ( DO Alicante) with their Laudum Roble       (Syrah/Monastrell), Laudum Roble Chardonnay and the Marina Alta Moscatel and Espumoso.

La Baronía de Turís presented their Henri Marc Syrah and Merlot monovarietals, their ecologic Syrah and their new Vermut with a base of Malvasia.

Coviñas the Requena based bodega showed their Al Vent and Adnos Bobals and wines from the Aula range including the Cava Reserva.

Clos de la Vall from Moixent in DO Valencia brought their young white and three reds including the 100% Mando,  Vino de Autor.

Two other DO Valencia Bodegas, La Viña and Reymos  both part of Anecoop, showed the Icono Chardonnay, The Icono Selección Coupage and Venta del Puerto 18 and from Cheste the new range of La Vida en Colores, wines based on Moscatel, with Orange Mimosa, Manzana and Blue Hawaii, vibrant in colour, low in alcohol and easy drinkers.

Finally the Coop from Vivers in Castellon showed their top Olive Oil Lagrima, an award-winning and very popular oil found in top restaurants in the Community.

This whole Agricultural Coop movement is dedicated to the improvement in quality of its products and this is seen in the number of International awards they are winning and export sales they are making. 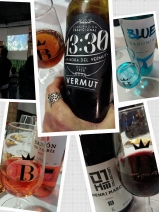 The 26th November we also atended the released of the new vermut from Baronía de Turís “13:30”, their “Blue Baronia” an innovative challenge for them mainly focused to the young people, made of malvasía and moscatel varieties, very soft, sweet and fruity. We tasted as well the rosé Baron de Turís, just bottled the previous day and the “Henri Marc” Shyraz.

The 1st December saw the opening of Ostrarium, the new Oyster Bar and restaurant in Calle Chile run by Andrés Soler. 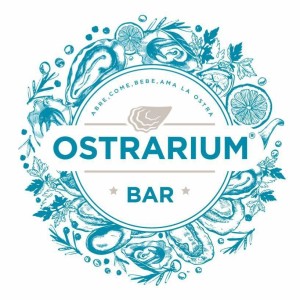 In an ambience reminiscent of a seaside seafood stall, oyster shells hanging like drapes over the bar, oysters and seafood delights burst out of the cold cabinets with a fine selection of  wines, cavas, champagnes and artisan ales to accompany them.This place has real style for all its Essex clichés, and deserves to be a real success.

Apart from a fine range of Oysters from the Normandy beaches, there are examples from Marennes ( Fines de Claires), Ireland ( Regal) , Perla negra from Brittany and the Ebro Delta.  All come at varying prices. 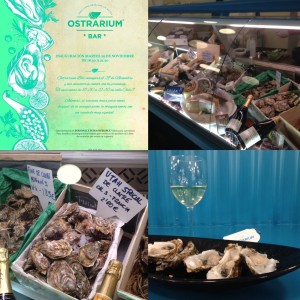 Also there Ibericos, cheeses, smoked seafoods, airdried fish ( salazones) and conserves.  There is a tapas menu and for 12€ you can have three starters with a different main dish each day from Monday to Friday.

Ostrarium deserves to be a huge success and we wish Andrés all the best with this welcome addition to Valencia´s gastronomic experience!

Wednesday saw the re-opening of a revamped Taj Mahal restaurant, one of Valencia´s oldest Indian/ Pakistani restaurants. The old restaurant on Calle Manuel Candela was founded in 1990 and had been gutted.

An intense refit has created the least `Indian´ in style restaurant in Valencia that I have seen, an airy, modern,  minimalist white and black with the odd stray into gold defines  the new decor. Always a popular venue Taj Mahal is recognising that Valencia is a becoming a multicultural tourism centre as well as enjoying a hardcore English-speaking, curry loving population and an increasingly large number of Spanish customers who have found a taste for curry. 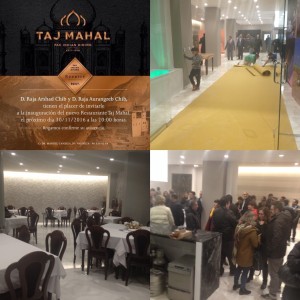 The refit was completed with the laying of a curry coloured ( pale gold) carpet  just as the press, invited guests including Catering school professionals, Valencia Tourism representatives and  chefs such as Sergi Peris and Kike Jiménez arrived. 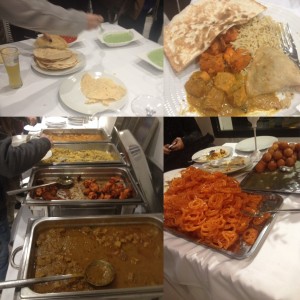 Finally Saturday saw the second major wine event of the week. an homage to one of the icons of Requenense wine.

Francisco ( Paco) Bermell Martinez was born 100 years ago. He was the founder of Bodega (now Pago) Vera de Estenas. Rather more ( if this were not important enough) Francisco was a key figure in the development of Requena as a wine area with its own definition. He was a pioneer of the DO Utiel-Requena.  José Cabrero, President of the Annual Festival for the Wine harvest reminded the guests that he had been the promoter of the Monument to the Harvest in Avenida Arribal.

José Vicente Guillem, one of todays more important wine figures, described in a moving contribution his personal memories of Francisco and his motives of always wanting to improve the quality of life for those living in and making a living from the comarca. 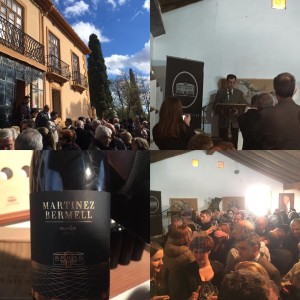 Following the presentation attended by family, friends, dignitaries from the area and Valencia and the press, there was a tasting of the wine which currently bears Francisco´s name, a pure Merlot 2015. A brilliant red cherry colour with violet notes and long slow legs, which, on the nose displayed ripe plum and damson notes. In the mouth the wine is all cherry and plum, ripe fruit with well integrated tannins and alcohol, young but evolving well.

A wine we suspect this scion of the family  of Félix Martinez,the current winemaker, would be rather proud of!