Cullera, a pretty seaside town is half an hour to the South of Valencia at the furthest edge of the Albufera Natural Park and its rice fields. It sits at the mouth of the River Jucar and is well-known for its many quality restaurants and fishing port.                 On May 23rd it held the II Concurso Nacional Paella de Cullera which within the two years of its creation has consolidated itself as a major gastronomic event in Valencia´s annual calendar.

This is not to be confused with the Concurso International de Paella held every year in nearby Sueca. This is very different in almost every aspect. Sueca is the competition for the Valencian Paella with chicken and rabbit. Its only common ingredient is rice from the Albufera! Firstly the whole idea was to create a paella within the KM0 made from entirely local ingredients available from the local market and rice fields. It is not a `traditional´ paella with a long history although it is based on a long tradition of seafood paellas for which Valencias Coast is famous. Paella de Cullera has a set recipe patented by the Town Hall and is available currently from around 40 of the towns restaurants. It has a touristic value but also a benefit that tourists will enjoy an authentic and  consistent recipe which guarantees they are eating local produce.

It consists of a seafood stock (made from the local rock fish), prawns, baby cuttlefish without the ink but with the melsa intact, `figatells´of scorpion fish  ( Rascasse), fillets of red mullet and rice from the DO Valencia ( variety JJ Sendra) fresh local tomatos for the sofrito, pimentón and saffron strands…..and of course the soul of the chef!  It was created for the town by chef Salvador Gascon of Restaurante Casa Salvador

a large and highly rated restaurant on the estuary with views over the river  to the mountains behind nearby Corbera. He is a founding father of Valencian gastronomy and winner of the National award for services to Tourism.   The competition is for Professional chefs from restaurants across Spain with three of the 18 places reserved for restaurants within Cullera itself. all the local restaurants can enter and then are judged in a semi-final to select the three going forward to the Competition. The judging panel consists of top-level individuals as well; Kiko  Moya (L´Escaleta, 3 Michelin stars) Alejandro Platero, (Macel.lum and finalist in Top Chef), the Director of the CdT, the Manager of DO Arroz de Valencia and Salvador Gascon. 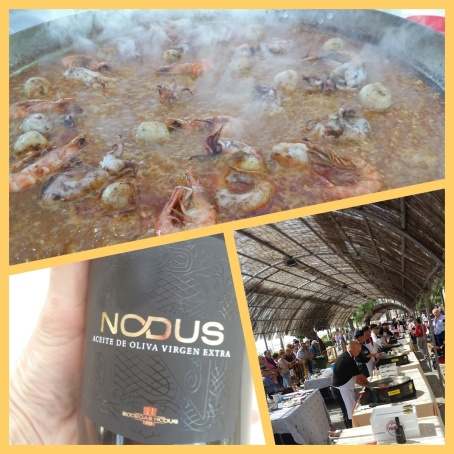 Then the sofrito can be cooked , the longer the tomato is cooked the more concentrated the flavour becomes, how much pimentón and saffron to add? The rice can then be added or the stock first and reduced a little before the rice is added. But once the rice is in for the 18 minutes cooking time it is time to arrange the red mullet fillets, prawns cuttlefish and figatells on the top. Once the paella is ready it is handed to the judges and the rest is history as they say.   The majority of the competitors were from the Valencian Community , Valencia itself and Cullera ( The Tennis Club, Rincón  del Faro and El Blanco). Several are well-known to us from previous competitions , Isabel and Paco from Nazaret in Puçol, Victor Granero from Casa Granero in Serra, Teresa and Voro from Gambrinus in Siete Aguas, Amadeo from Gandia and Miguel and Juani from L´Alcudia.

The gala lunch is held in Casa Salvador after this and before the prize awards. Here the competitors, their families , the judges, the press and the public enjoyed a meal of Toasted bread and Tomato with Loin of Tuna, Jamon, and Wild asparagus with a Mousseline of Foie. The principal plate was Paella de Cullera cooked in the kitchen of its designer and was followed by a pudding of Lemon Posset with a Mandarine Sorbet. These were served with wines from Nodus who co-sponsored the event.

Then the suspense is over and the awards are announced.

This competition was well organised and had immense support from the Valencian Government as part of its plan for gastronomy, wine tourism and tourism in general complementing each other as a driving force behind the regional economy. Paella de Cullera is a very good seafood dish, individual in its contents but with a typicity and quality of the regions produce. A worthy addition to the cannon of Valencian gastronomy!