A Tasting of Wines from DO Alicante, A VÍ Vid report.

VÍ  Vid were very pleased to be able to attend the Salon Profesiónal in Denia this week and taste the new crop of wines from DO Alicante. The tasting was held in the Cdt of the Marina Alta. 18 Bodegas attended and this is a selection of the wines which impressed us.

David Carbonell has been making wines from Viognier (and other varieties) at Vins del Comtat  for as long as we have known the bodega and was a pioneer of producing the variety in the region. Like us he believes it has adapted very well to its new home. He produces two versions, a 12%ABV young 2016 white which is full of peach and spice on the nose and in the mouth has a spicy long dry finish. His alternative is fermented in barrel with a further two months crianza in oak. If the first is gutsy, this is elegant and refined, it has all the fruit but also a vanilla and cream touch in the mouth. (2016, (12.5% ABV). 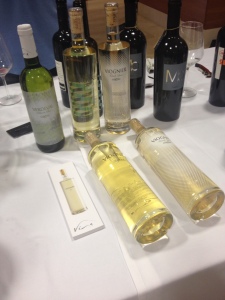 His young red, a 14.5%ABV Monastrell is vermillion in colour, from 2015 with 3 months in oak and is full of red and black fruit, very easy to drink with a nice touch of oak in the finish. The MO is Cabernet  Sauvignon with a little Monastrell,   a deep cherry colour with oak, vanilla and toast on the nose. In the mouth, deep, very smooth with a touch of tobacco in the finish. 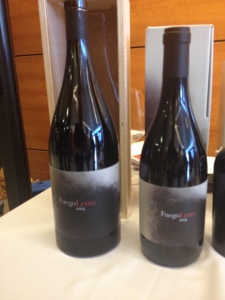 The Cooperative at Mañan produces a very good selection of wines  but the new Rosado from Syrah excels, a strawberry pink, clean, fresh wine, with redcurrant fruit and a clean, long dry finish. A favourite.

Finca Collado   the `bodega de referencia ´ in Salinas showed all their new wines including the legendary white from Moscatel and Chardonnay with 12.5%ABV. Very clean and fresh on the nose with apricot fruit and hints of pineapple in the mouth the chardonnay gives good acidity and structure. A full bodied white with hints of citrus acidity. For us the 2016 is the best  vintage produced to date. The Rosado from Merlot with a bit of Monastrell is also pale strawberry in colour , very fresh on the nose, light red fruits but in the mouth it has depth, good acidity and a long dry finish with minerality. 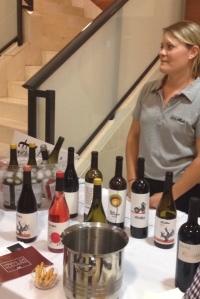 Their 2016 Syrah is creamy, fresh and full, but an easy to drink young wine with potential to keep for 2-3 years.

The VS 2014 has nine months in oak and is a deep black cherry with the legs colouring the glass. On the nose it is soft fruit, but in the mouth this 2014 from Cabernet Sauvignon, Monastrell and Merlot is big and chewy! They also make a reserve version with 21 months in oak from the same wine as the VS. This is not so youthful in the glass, is fruitier on the nose but you also note the effect of oak, and is smoother and rounder in the mouth. For serious meat dishes! 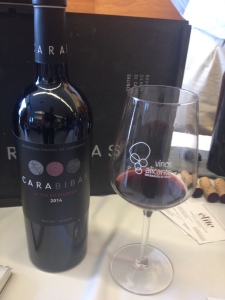 The bodega of Joan de la Casa  in Benissa has been described as a `Friki´ but chatting to him I found his different approach to making wines quite sensible and worth his efforts! He makes his whites from Moscatel by picking the grapes later when the sugar content  and concentration is higher. The grapes are macerated on their skins, left in contact with their lees and in the case of Tossal enjoys oaking as well.

Nimi  2013 is 13.5% ABV, gold in colour, from 45 year old vines grown on white chalky soils. The nose is very complex, anise, orange flower, orange peel, and this is repeated in the mouth which is complex, concentrated and has a very long dry finish. The 2012 vintage of this wine has more structure, is deeper gold in colour, in fact every facet is deeper or more concentrated than the younger wine. Part of this will be evolution, the rest the difference in vintage but these are dry moscatels worthy of searching for (you can ring the bodega!) 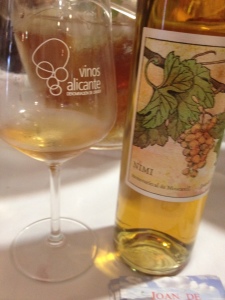 The Tossal 2012 is fermented in barrel and then spends a further  12 months in the bottle before release. Even deeper gold in colour, it has honey, notes of oak and spice. In the mouth vanilla and fruit, orange peel , very different!

There are two reds from Giró, a local variety with vines between 40-80 years of age. The 2012 has 12 months in American oak, is cherry red, with black fruit, and is medium bodied. Nice fruity finish. The other version has 18 months oak and is blended with Tempranillo.  blackberry fruit and a creamy complex flavour, round. Very nice. 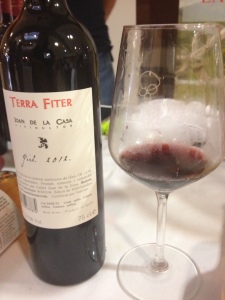 No tasting of wines from Alicante is complete without visiting Pepe Mendoza whose Bodega is in Alfas de Pi. The range of wines illustrated are widely available in Carrefour and we enjoyed the fresh, buttery Chardonnay, with tropical notes of pineapple, with a well balanced long finish. 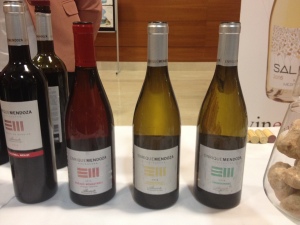 Bodegas Sierra Norte were showing the Pasión de Monastrell, from 2014 vintage with six months in oak. A youthful deep black cherry colour, mature black fruit on the nose and just a touch of oak in the creamy long finish.

Finally we tried Essens Chardonnay from Vinessens in Villena, a bodega we found six years  ago and which exports to the UK. This fresh Mediterranean Chardonnay is fermented in oak barrels, has nice tropical notes and a light long dry finish.Very satisfying.

Selection of Wines from Vinessens.

This was a rare opportunity for us to take in so many wines from the DO in one go and a valuable excercise in keeping in touch with some of Alicante´s best producers. Next week we hope to taste some more in the Winecanting festival!