Valencia has been visited by La Rioja this week part of a nationwide gastronomy tour.

‘La Gastronomia de La Rioja’ was the protagonist and VÍ Vid was pleased to be invited to Alto Colon, the Ricard Camarena restaurant over Colon Market to participate on Wednesday 24 October. Organised by SeviNet together with the Riojan Government the event took place on Tuesday and Wednesday with the cooperation of a number of food suppliers and the various IGP and DO’s of the region and clearly was aimed at promoting the rich regional gastronomy.

We were welcomed with a glass of vermut  Martínez Lacuesta whilst the 150 guests assembled which was accompanied with IGP Chorizo Riojano and Queso Camerano DO. The chorizo was a deep red colour, sliced into generous rounds from the traditional horseshoe-shaped sausage, firm in texture with its strong flavours of smoked pimentón de la Vera and garlic. The Camerano cheese with its own DO is from goats fed on local shrubs and bushes and was fresh and semi-cured.

The event was led by journalist José Ribagorda and the gastronomy expert Mikel Zeberio who introduced each part of the experience with a brief discusion on the characteristics of the ingredients involved.

We moved on to the first two dishes, ’ Champiñón Escabechado’

(sliced button mushroom in vinegar) and a ‘Cremoso de Coliflor de Calahorra’.  The cremoso with its varying textures from it own IGP worked particularly well with the Rioja Rosado Tobía, Alma de Tobía fermented in barrel with its strawberry colour, rose-hip syrup nose (jarabe de escaramujo) and good acidity and length in the mouth.

The next two dishes were quite a contrast!

The first was ‘Alegría riojana rellena’ a small red chilli pepper stuffed with minced meat, a real surprise to many of the guests with its intense dry heat! Palates were calmed however with the traditional ‘Alubia de Anguiano’ a stew of the famous red beans with jamon which was rich and satisfying and well-appreciated! 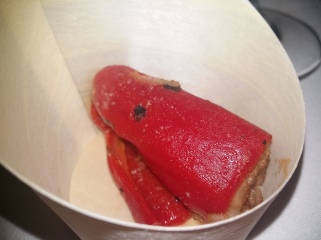 These were served with Tobía Selección de Autor Tinto 2015. This Rioja is a modern style wine and was served cold, but when it had warmed up and opened out it had violets on the nose. A blend of Tempranillo with just 20% of Graciano and Garnacha, it was full in the mouth, jammy with mature raspberry fruit, good volume and length.

sofrito tradicional’ was a dish of tender chunks of meat, falling apart with a rich base of flavour, the animals are fed for at least four months on fresh grass in the Logroño district. 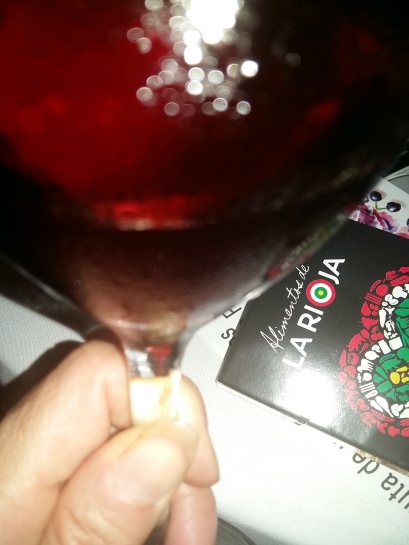 The second, ‘Chuletillas de Cordero Chamarito al sarmiento’ were milk-fed baby Lamb chops from the regional Chamarito breed, less than 50 days old at slaughter, cooked over vine cuttings and were the most juicy, flavourful and tender pieces of lamb we have ever tried.

Served with 2015 Reserva Oscar Tobía, a ‘Vino de Autor’ this is Tempranillo with just 7% Graciano. This wine was a perfect match for both although it too needed to warm up first.

The cookery was coordinated by Ventura Martínez (Chef Nino, Delicatto) and served with minimal delays given the number of people present.

We finished a very successful evening with pears from DO Rincón de Soto served with a syrup of red wine and cinnamon.

This important roadshow will be visiting Malaga in November, given an opportunity to attend, do not miss it!