VÍ Vid, the London Paella School and a Masterclass in Seafood Paella Cookery.

VÍ Vid and the chef proprietors of the London Paella School Xavi Moreño and Javi Rejas have been friends since we initially met when they were contestants in the 54th International Paella Competition in Sueca back in 2014. We have watched with interest as they have developed the school teaching residents of London and visitors to the capital how to cook the authentic Valencian paellas as well as organising  corporate events with team building and cooking paellas in Battersea Park and the London Festival . 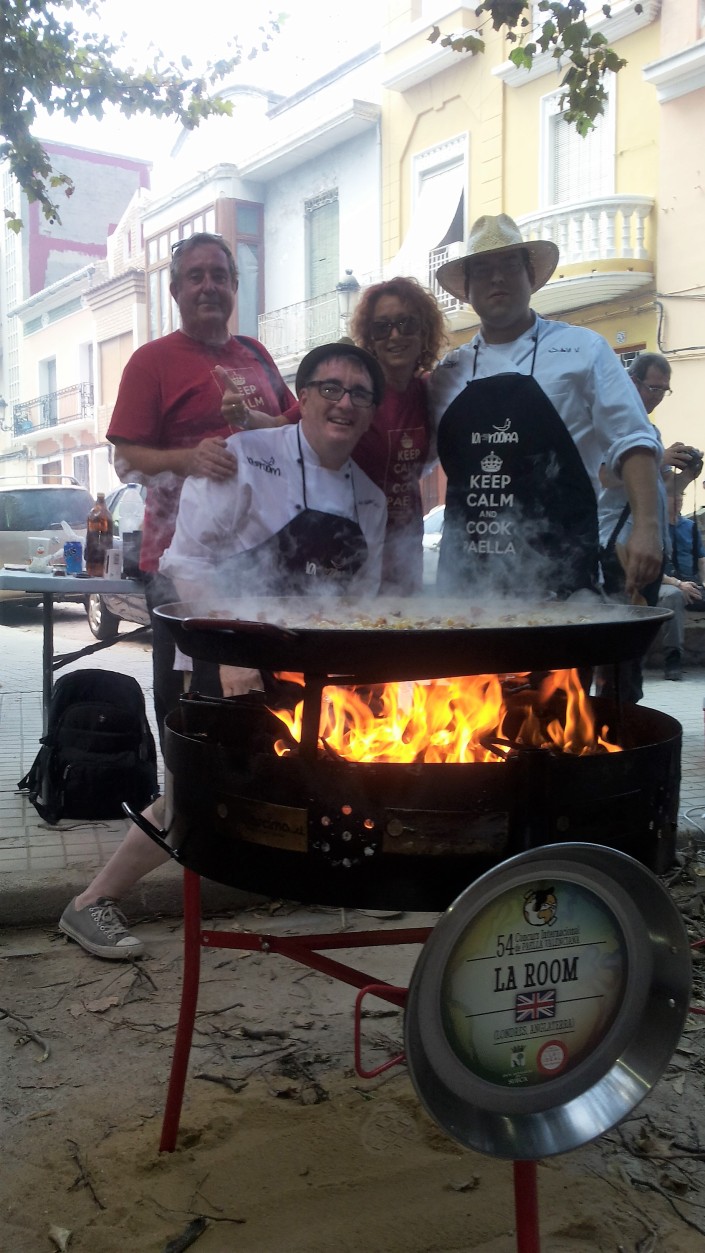 VÍ Vid with xavi Meroño and javi Rejas in Sueca, 2014

This year Xavi presented more than 1500 portions over the London Festival weekend with a 100m queue at all times, content to wait up to an hour  for an authentic chorizo free paella, testament to the fact that the real item is very popular in the Uk and not diminished by the ‘variations’ of certain celebrity British chefs.

Whilst Javi is developing the brand currently in Singapore, Xavi has been active in taking the project a step further by inviting guests to participate in 4 or 6 day cooking holiday´s in Valencia where they can enjoy not just masterclasses in cooking authentic paellas and other dishes but also culinary tours.

This weekend the first course started and Xavi has escorted his guests to Algiros to see a local paella competition ( of the sort we have reported on many times before) to eat in some of Valencia´s best restaurants such as Succursal, visit the rice fields of the Albufera (and enjoy planting the new rice at Tartana) to visit the Central market and buy authentic ingredients such as saffron, paella rice and the seafood for the masterclass in Seafood paella.

This was the point at which VÍ Vid joined in. 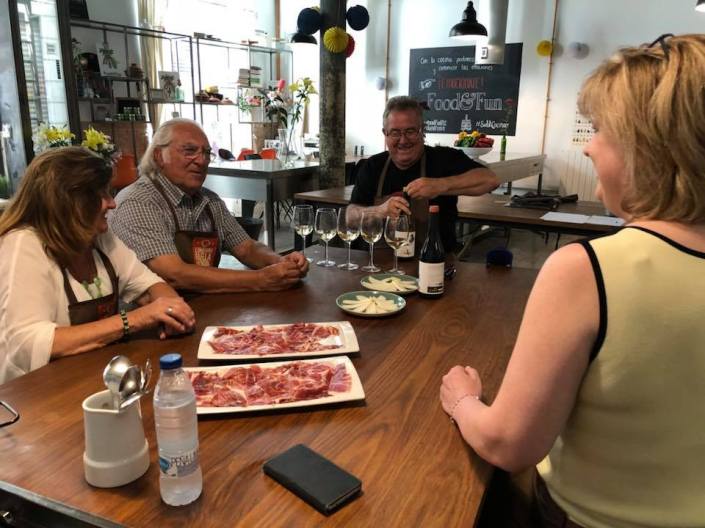 Xavi had invited us to attend this masterclass, held in the excellent facilities of Food and Fun in Calle Linterna with its individual cooking stations provided by Flames VLC who also equipped the London facility.

The brief was to provide some wines (Valencian wines of course!) to accompany the aperitifs ( Jamon Iberico, cheeses from Los Pedrones, tortilla, clams and tellinas and, of course the Seafood paella.)

So on Sunday 10 June we presented our selection of wines from across the Valencian Community whilst Xavi showed us how to prepare a fumet of fresh seafood, the seafood for the paella itself and then cook the paella. 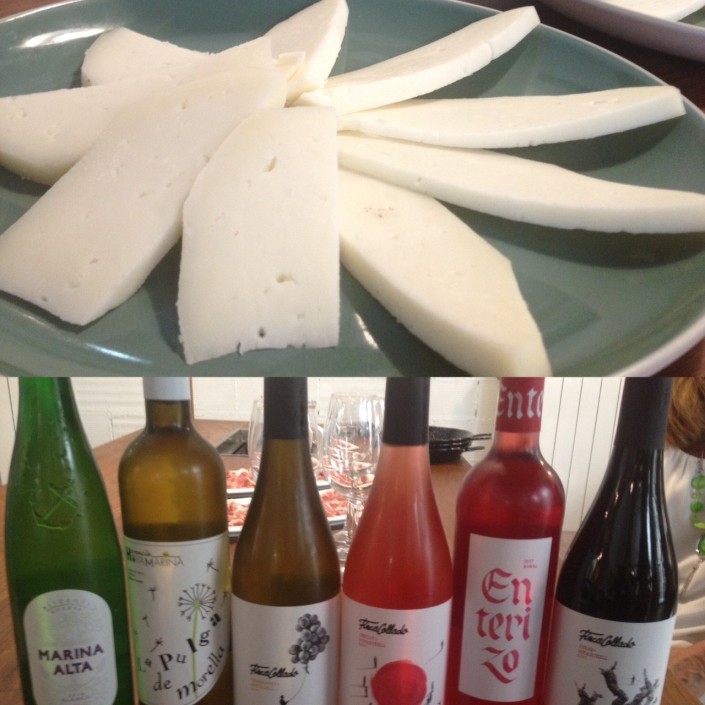 We started with two whites, Herencia HoyaMarina´s ‘La Pulga de Morella’ ( DO Valencia  – a blend of  Sauvignon Blanc and Macabeo and Finca Collado´s Blanco, DO Alicante and a blend of Chardonnay and Moscatel). These contrasting whites provided a perfect match with the salty jamon and the mild sheep’s cheese but, for comparison we also tasted the Finca Collado Syrah/Monastrell blend, a fruity red for drinking young which also matched well.

Whilst  Xavi then demonstrated how to cook the fumet with onion, leek, carrot, olive oil, pimentón, bay leaf, small fish including scorpion fish for its red colour and flavour and of course, ‘galeras’ and shore crabs. 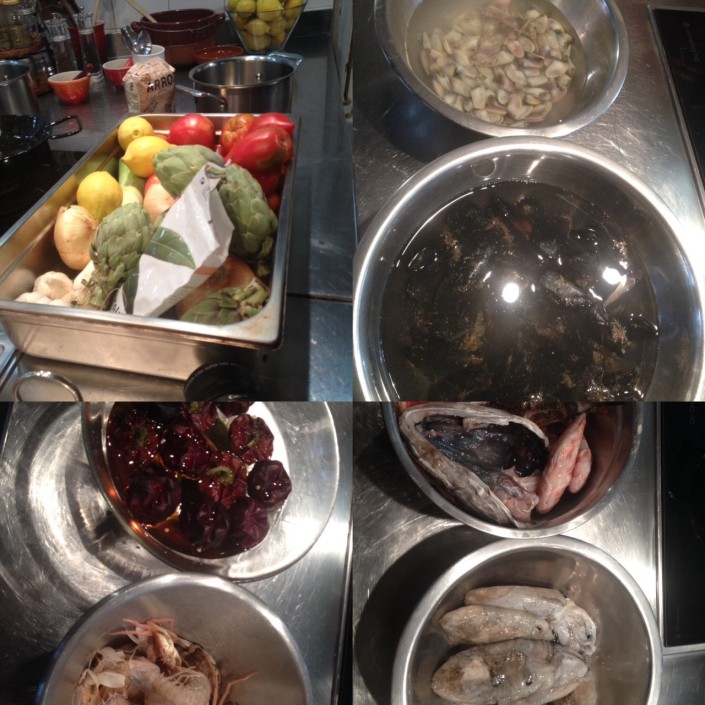 Whilst this cooked down  and then enjoyed a gentle simmer for 20 minutes Xavi prepared the prawns, including a special technique to remove the intestine without butterflying them, and the mussels, clams and cuttlefish.

The paella commences by frying the prawns in the hot oil to extract flavour and then reserving them. The cuttlefish goes next and then when this is softened the sofrito commences with the addition of grated skinned tomato, then ñora ( a dried red pepper of the variety used for pimentón which has been soaked in water for about 4 hours) chopped with garlic. When this is cooked down the fumet is added, about three times the volume of rice to be added later. The stock is checked for salt then when this is simmering the rice goes into the pan which is shaken to even it out and a fierce boil commences for 8 minutes. 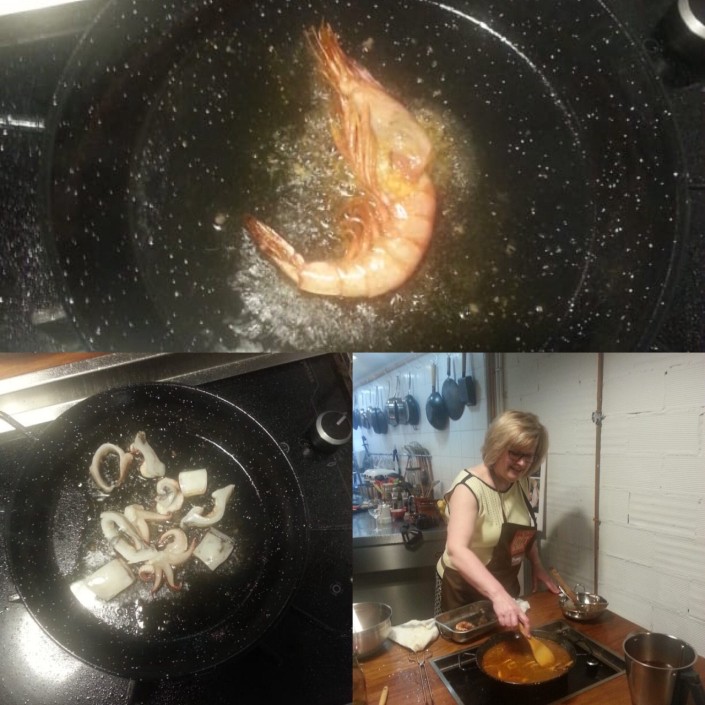 commencing with the prawns, cuttlefish and advancing!

The prawns, clams and mussels are added to the dish decoratively. After this the heat is reduced until the rice has absorbed all the stock. If socarrat is required it is cooked gently a little longer to allow the oil to cook out and create the golden base. 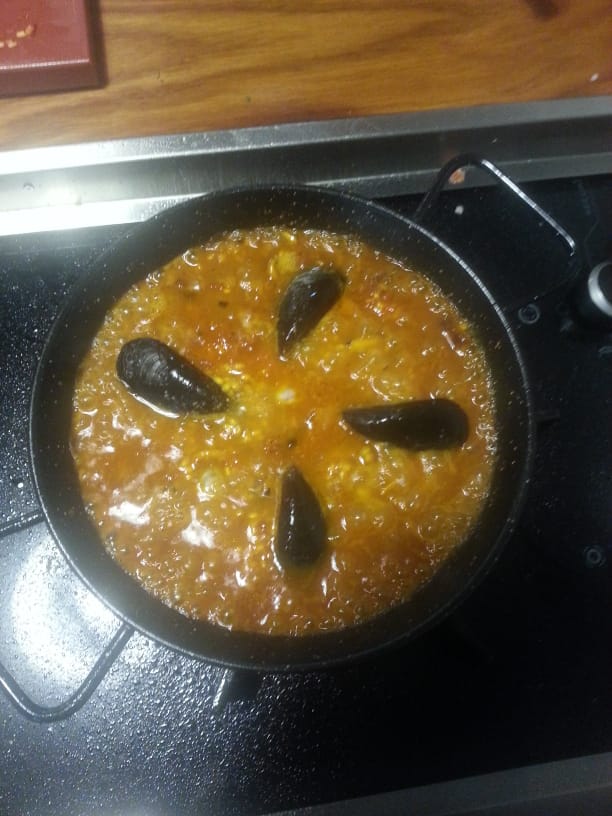 The paella rests then for 5 minutes or so.

Whilst all this happened we moved on to Marina Alta, a dry Moscatel from Bocopa in DO Alicante, pungent, fresh and aromatic with an apricot nose as a further aperitif and the paella demonstration continued.

Of course, as it was a masterclass the participants including Canadian Patricia Allard (pictured) then had to match Xavi´s paella by preparing a fumet and paella of their own. 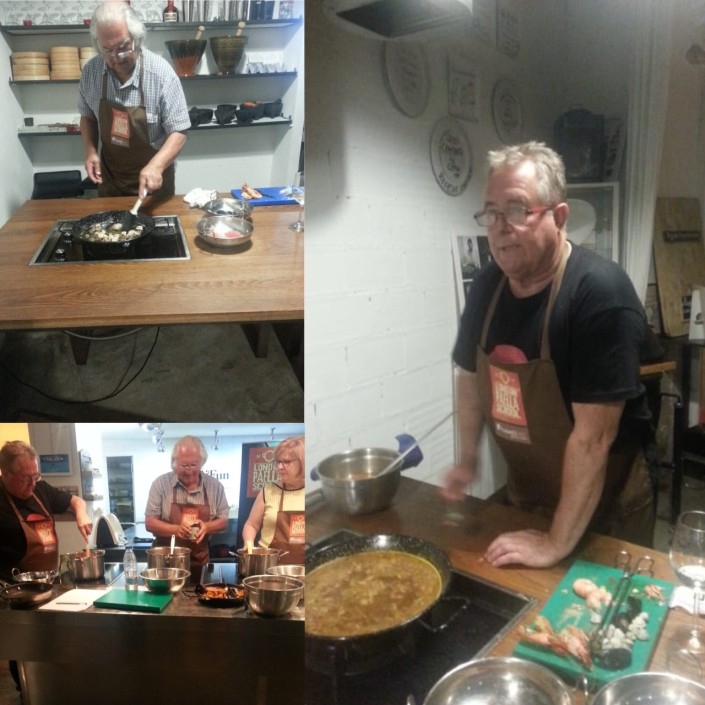 clockwise cooking off the cuttlefish, boiling the rice, and stock preparation.

Once we had all done that, with Xavi´s enthusiastic encouragement and guidance we sat down to share our attempts and enjoy them!

With this we drank Bobal Rosado from Coviñas, with the depth of a red, but the fresh light weight and acidity of a white wine its fruit was the again the perfect match for the paella as were the whites from Finca Collado and Hoyamarina. 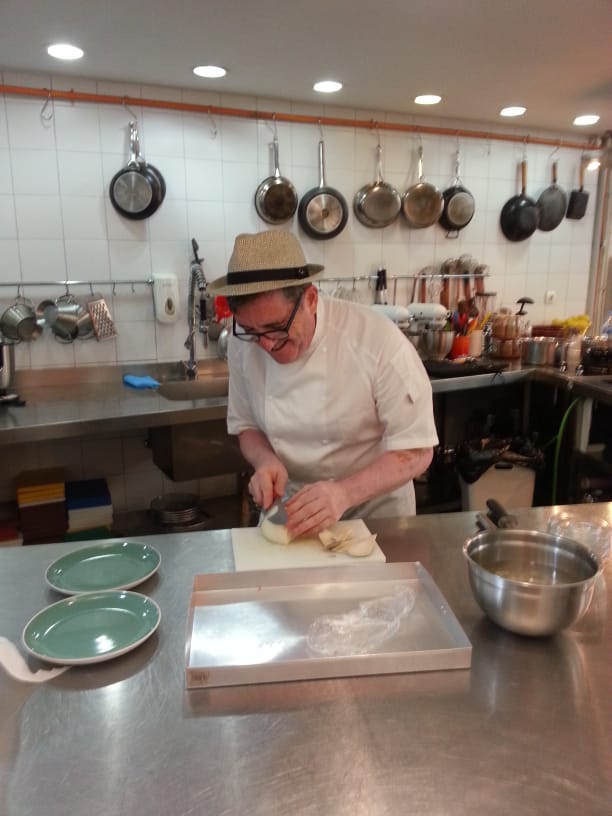 As an experiment in collaboration we were very pleased to have been invited to participate and complement the gastronomy with some of Valencias best wines and thank the bodegas once again for the trust they show in us. We believe this is a fantastic initiative and look forward to more schools visiting Valencia. 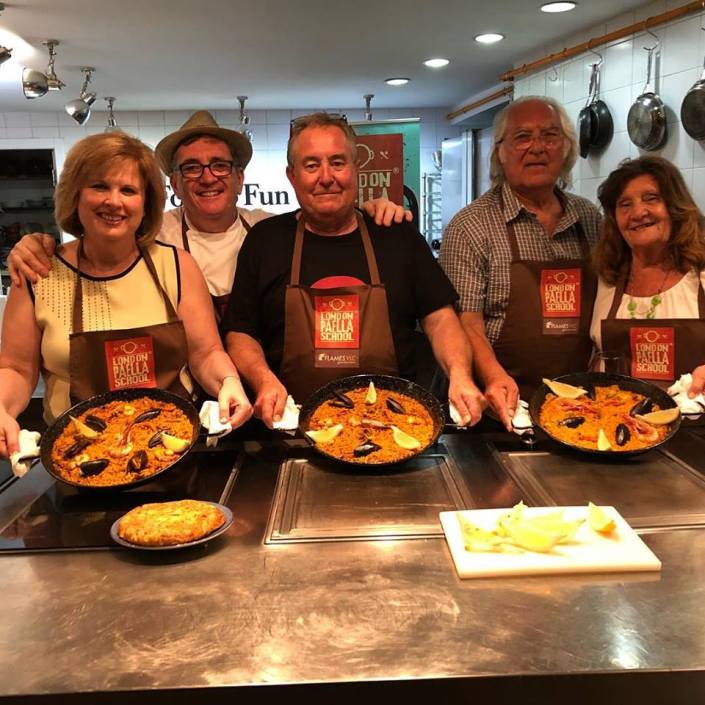 Proof of the pudding…..

We hope this is the beginning of a lasting collaboration with Xavi and the London Paella School  with its #paellacookingholidays courses in Valencia in the future.

One thing is for sure the participants thoroughly enjoyed themselves and learned a huge amount at the hands of this genial ‘cocinero’ and superb teacher! 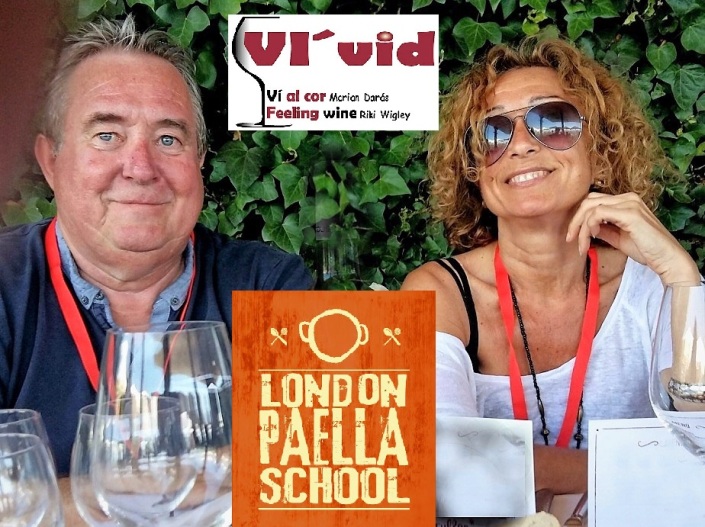